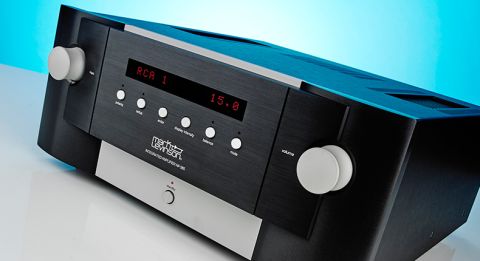 A hugely capable amplifier that excels in resolution, composure and build quality. The built-in DAC is good too

Mark Levinson No.585 deals
Amazon UK View Similar
Amazon
No price information
We check over 130 million products every day for the best prices
powered by

Mark Levinson couldn’t be any more bullish about the No.585 amplifier. The company claims this is the finest integrated it has ever made – ­­­­and considering the brand’s rich heritage that’s some statement.

But we think the sky-high price tag positively demands such a standard.

Purists usually consider integrated amplifiers as something of a compromise, something bought when pre/power combinations are too expensive or take up too much space.

Considering the No. 585’s price and bulk it doesn’t seem to offer either advantage over two-box alternatives. So why buy it?

Despite its size this is still a neat solution. There’s no need for additional (and expensive) analogue interconnects between the pre and power sections, and just a single mains cable.

The lack of interconnects shortens the signal path considerably, and avoids any of the distortions introduced by such a link. The No. 585 also has an additional ace up its sleeve in the form of a built-in DAC module that will cater for just about every digital file type commercially available.

Take the amplifier out of its packaging (it weighs a hefty 33kg, so make sure you have a strong friend to help move it around) and things start off well. From its striking black and silver colour scheme to that distinctive bold display, the No. 585 looks every inch a Levinson product. Aesthetically, this amplifier couldn’t be from any other brand.

That follows through to the superb construction. Your £11,000 buys a highly rigid chassis and a flawless finish. We love the positive, precise feel of the control dials and the aura of luxury that oozes from every button and perfectly aligned panel joint.

When it comes to build, the No. 585 is one of the handful of products where the word ‘immaculate’ truly applies. We even like the No. 585’s remote. It’s solid, made of metal and hassle-free to use. There’s not much more a remote needs to be.

That large red display is something of a Levinson trademark, and though it looks basic and resolutely retro, we have nothing but praise for its clarity. It can be read easily from the other side of a large room, even in bright sunlight.

Apart from showing the volume level – something that changes in precise steps – the display is also useful for the set-up menus. These menus control everything from the naming of the inputs to the type of digital filter used in the DAC section. It’s all logically arranged and easy to manage.

If you want to use a separate subwoofer with your stereo pair of speakers you can even use the No. 585 to do the filtering. It’s an impressive bit of flexibility that most rivals don’t offer.

As well as feeding a subwoofer, the amplifier’s line-level output can also be configured as a variable preamp output or a fixed feed. Which is handy.

Take the lid off and you’ll find that the company hasn’t taken any shortcuts here either. It’s a dual mono design with individual power feeds taken from the chunky 900VA toroidal mains transformer for each channel. This kind of configuration reduces any unwanted interaction between them.

Great care has been taken with shielding to minimise noise. Take a careful look and it’s obvious that much thought has been given to getting the basics of layout and component quality right. The amplifier’s power output is rated at 200W per channel, which should be enough to get high levels out of most speakers.

The digital module will handle everything from 32-bit/192kHz PCM files all the way to DSD 128. That should be enough to satisfy most people, as it almost certainly covers just about any file type you’re likely to use.

Connectivity is very good for a product of this type. There are four stereo analogue inputs including a single balanced XLR option.

Digital is even better, with six choices including asynchronous USB, AES/EBU alongside pairs of optical and coaxial inputs. That’s more than enough for this amplifier to slot into all but the most complex of stereo systems.

Want to play records? There’s been talk of a moving coil/moving magnet phono module – indeed there’s a space for it in the amplifier – but no firm timetable on its introduction or cost.

As with any product of this type, it pays to use high-quality partnering equipment. We used our reference Naim NDS/555PS streamer and Clearaudio Innovation Wood record player as the main sources, aided by a MacBook Air loaded with Pure Music media software alongside the usual iTunes.

Most of the time we used our resident ATC SCM50 speakers, but these are swapped with alternatives including Spendor’s SP2/3R2 and Monitor Audio’s PL300s to see how the amplifier responds.

It takes a little time to appreciate the No. 585. It has an understated presentation that doesn’t necessarily grab the attention on a short audition. Give it time though, and it becomes clear that this is a hugely accomplished product.

We start with Stravinsky’s The Rite of Spring (16-bit/44.1kHz) and like what we hear. The care taken with the circuit layout is obvious in the integrated’s very low noise floor.

There’s little sign of low-level noise or hiss that most amplifiers generate – usually heard when there’s no signal and you put your ear next to the tweeter – and this means that the sound has a silent backdrop from which to grow.

Once the music gets going we’re impressed by the control and resolution on offer. This amplifier really sounds precise when rendering detail, but it’s the neat way the unit paints the leading and trailing edges of notes that shines. That sense of control is absolute and backed up with impressive organisation.

When the piece gets demanding – and it does with regularity, the No. 585 takes it all in stride, sounding calm and composed even when pushed hard.

On a good recording such as this it’s easy to appreciate the amplifier’s fine sound staging. It’s suitably expansive and layered with care. There’s an unshakable stability here too, which means instruments and sounds are locked in position even during crescendos or strong dynamic shifts.

Tonality is nicely judged. The No. 585’s innate refinement is helped by a slight sweetness in the overall balance, which also prevents it from making a meal of less-than-perfect recordings.

We play Eminem’s Mockingbird (192kbps) – a thin and hard recording by most standards – and this amplifier keeps things entertaining. It reveals the shortcomings, but not so much that they overshadow the music's good qualities.

Mark Levinson has included a setting marked Clari-Fi, a technology we first came across in a Harman wireless speaker, which aims to improve the sound of compressed recordings by attempting to reconstruct information lost during the compression process.

It certainly helps, adding a bit of sparkle and expression to the sound, but we also note a slight loss of transparency. It’s worth trying, though.

The No. 585’s DAC circuit is a fine one, working well across a range of file types. Stevie Wonder’s Living For The City (on DSD) is a terrific recording, and the Levinson does a good job. There’s subtlety here alongside a decent degree of punch.

Rhythmic drive is pretty good, without offering the kind of hard-charging momentum the best amplifiers can. It’s entertaining though, and has us listening long into the evening.

It’s certainly possible to buy a more exciting amplifier for the money – the No. 585 trades a degree of dynamic expression and timing ability for resolution, control and organisation.

In these areas it’s pretty much as good as amplifiers get at this price. It’s also beautifully made and has the aura of a product that’s engineered to work for decades.

And it’s a Mark Levinson – one of the companies that helped define the high-end market as we now understand it. To many people that heritage still counts for a lot.

See all our Mark Levinson reviews