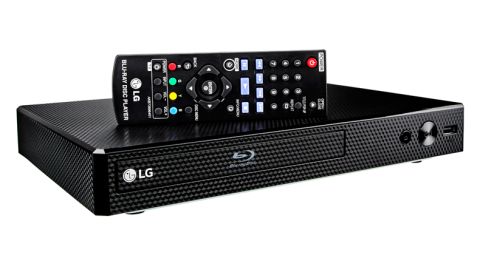 Strong picture and features, but needs better sound for a fifth star

The BP350 is one of four new Blu-ray players joining LG’s MUSICflow multi-room family, capable of streaming music from CDs and USBs to any of the five-strong range’s wireless speakers.

Those who haven’t bought into LG’s ‘smart hi-fi audio’ can use it as a regular Blu-ray player, and to that end it’s a decent option. Feature-wise, DLNA support and a throng of smarts are there for the taking.

There’s built-in wi-fi, but oddly no ethernet port for a wired connection.

Design is a conversation starter. Its shimmery diamond-effect chassis makes the LG ideal for anyone with style in mind, and you’ll need some willpower not to stroke the textured plastic.

The solid black power and eject buttons stand out well against it. Our only gripe is that the disc tray cover feels a bit wobbly as we put a disc on it.

You may be disappointed to learn that LG’s beloved webOS interface doesn’t feature on the BP350, but its other smart platform (appearing on its lowest-ranging TVs) is almost as pleasant.

Greeting you upon start up (it takes around seven seconds) is a home screen featuring a series of tabs across a colourful background.

Here you can locate files on a server or connected USB and get your teeth into its generous app offering: Now TV, Netflix, BBC iPlayer, and Amazon Instant Video, as well as rarer ones like Blinkbox, Spotify and Deezer, all make an appearance.

The apps are located in the tab labelled ‘Premium’. Hover over it and they pop up along the bottom, so are handily within reach without having to enter another page.

The LG AV Remote 5 app can be downloaded (free on iOS and Android) and used as a basic controller. It’s as snazzy and responsive as mobile apps come, and it helps that the interface looks and works similarly to the player’s.

In fact, you might even prefer it to the remote. Some may not get on with its distinctly ridged back – designed for your index finger to lie on – and the majority of its buttons are tiny.

Everything you’d expect is present and correct, though, and we find the numerical keys handy for jumping to specific tracks on CDs.

Music replay is clear and upbeat, the LG’s sonic presentation detailed, fast and agile. Even an average quality recording, like the Eurythmics’ Greatest Hits, sounds clean enough through the BP350, and the synthesized beats are communicated with fervour.

With music and movies, it’s not as precise or spacious as some of its rivals though. It could be more ponderous, too, when big explosions dictate the soundfield.

The picture performance nips any carping in the bud, though. It’s a punchy and crisp picture, the pin-sharp lines and bold, lush colours making for a compelling watch with both Blu-ray and DVD.

Clean and controlled, it isn’t ruffled by fast moving action. And contrast is impressive too: whites are pure and blacks even more profound. It dissects Blu-rays with rigour and scrambles after the detail in standard definition too.

It’s not the last word in subtlety (that accolade belongs to the Sony BDP-S4500) and has a harder time with reds and greens than the top seeds. But for the money, the LG BP350 gets a lot right.

For its pictures and features, the BP350 is very competitive. If the sound were slightly better, it might not be settling for four stars.

Read all out Blu-ray player reviews

Read all our LG news and reviews