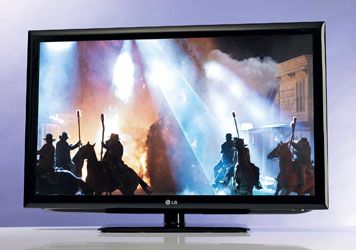 It can be hard to dissuade yourself that bigger isn’t better when it comes to buying a new TV – we know, we’ve been there.

There’s a lot of value to be had with bigger screen sizes, which can make jumping up a size or two all too tempting – and here’s a case in point.

No 3D, but almost everything else
It certainly stacks up competitively when it comes to specification.

Boasting a Freeview HD tuner, Full HD, 1920 x 1080 resolution, three HDMI inputs, access to LG’s Netcast internet TV content and a USB input that can play back high definition DivX video, there’s nothing missing for a £500 TV in 2011. (You’ll have to make do without 3D if you’re looking around this price – the cheapest 3D set we’ve seen is £850.)

We start with some daytime TV and we’re largely impressed by what we see (the tuner, not the programming) and, indeed, hear.

This LG sounds clear and full-bodied, putting others to shame.

Show guests have decent skin tones, garish studios are presented faithfully, and scrolling motion is handled competently. There is some digital noise, though, and compared with the best it lacks a little subtlety.

Switch to Freeview HD and the jump in quality is tangible and it’s an enjoyable image – but still a little blunt with some colour and detail.

A capable scaler
We switch to video and choose to bombard ourselves with Scott Pilgrim vs. the World, first in DVD form and then Blu-ray.

Testing the scaler, the LG proves itself capable enough. Again, there’s a little bit of instability at times, but black levels are solid, there’s good insight, and colours and skin tones are punchy without being overcooked. The Blu-ray has the picture looking pretty good, too.

As we watch more content, we notice that this LCD set isn’t perfect off-axis. But, from a typical viewing spot, it’s colourful, fairly clean, solid with fast motion, and capable of decent detail.

LG’s Netcast is still at ‘generation one’ stage of internet TV, not offering catch-up TV services such as iPlayer or any streaming movie content.

Instead you’re left to watch YouTube or endless weather reports.

We’re sure that will change in time but if that’s a key feature for you, you’ll have to think of an alternative.

A lot of TV for your money
Elsewhere, the remote is simple enough, the interface very clean and clear and it’s a decent-looking, relatively slim chassis.

There’s a lot here for £499. A 42in TV is still considered on the large side by most people and this is a strong performer with an HD tuner in to the bargain.

It’s not quite flawless – the odd bit of noise, the slight lack of finesse – but if it’s inches you’re after, this might just be your winner.