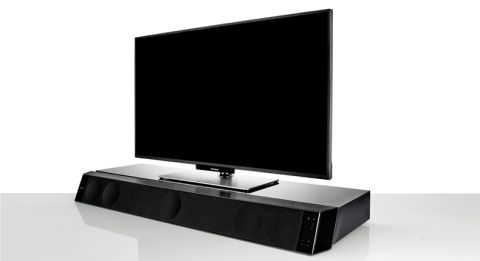 Dimension is a bold move for Focal but it’s paid off. A high-end, high-quality soundbar

Soundbars are big business. In fact, they’re one of the most searched-for products on the What Hi-Fi? website.

But where budget designs are ten a penny, high-end soundbars aren’t, and some traditional hi-fi companies see these products as a way of entering the market without the intense competition.

Brands who know a thing or two about loudspeakers - such as Bowers & Wilkins and Monitor Audio - have all had success in this field, and now it’s the turn of French company Focal to come up with something that makes us stop and listen.

Those with small racks or tiny TVs need not apply – Focal suggests using it with 50in screens and bigger, and we’d agree. There’s a wall-mount kit in the box or, if you do happen to have a rack of suitable width, you can perch the soundbar on the supplied feet.

Installed that way, the unit lies back at an angle but doesn’t slouch – indeed, it looks purposeful and stylish. Alternatively, you can hand over an extra £300 and buy it with Focal’s matching Dimension subwoofer.

We’re not huge fans of the way the two connect via a short run of speaker cable; it’s a little crude. Something else to bear in mind is the design of your TV’s stand.

It will have a big say in whether the overall aesthetic works.

Once the sub is wired and the relevant switch is flicked on the back of the soundbar, the subwoofer brings a subtle increase in weight.

You don’t quite get the bombastic levels of bass you may have been expecting, but adding the subwoofer allows the system to sound clearer, more open and more dynamic than it does without.

Our only minor grumble is that this two-box configuration doesn’t sound quite as cohesive. Highs sound more exposed and a touch harsher, but that doesn’t dampen our enthusiasm for the duo.

The soundbar is ported at either end and uses five ultra-flat drivers and six channels of amplification (this includes one for an external subwoofer – the Dimension or other brand).

Unlike some rivals that claim to bounce sound off your walls to create a surround-like experience, Focal says it uses clever processing to achieve that end, and manipulates the audio signal in an attempt to place you in a bubble of sound.

Wave your hand over the right-hand side of the bar and a touch-sensitive control panel comes to life. It’s a classy touch (excuse the pun) and allows you to change volume, switch input and engage the night mode, which reduces the unit’s dynamic range to make quieter late-night viewing easier.

That control panel is in stark contrast to the measly credit-card remote that comes with the bar. It does a job, but hardly matches the appeal of the Dimension.

At least you can use it to make adjustments for lip-sync, a feature that’s sometimes overlooked on products like this.

You can feed audio from your TV a couple of different ways, either through the Focal’s optical digital input or via the ARC (Audio Return Channel)-enabled HDMI output (provided your TV has a compatible socket).

There’s also a single HDMI input for connecting an external Blu-ray player, games console or set-top box. The Dimension can’t decode high-res soundtracks, but it can strip the core Dolby and DTS mixes from Blu-ray discs.

A dedicated output means you can connect a third-party subwoofer – if you use it with the Dimension sub, you’ll need to use the small spring-loaded terminals on the back panel and run the supplied umbilical cable between the two.

A lack of built-in Bluetooth isn’t the end of the world, but at least Focal includes its aptX-friendly Bluetooth dongle as part of the deal. It plugs into the rear 3.5mm input, but given the other cables in close proximity, things can get quite crowded.

Before you unleash the Dimension, you need to complete the set-up process.

This involves flicking a selection of switches which correspond with how and where the bar is being positioned, how far you are away from it, how damped your room is and whether or not you’re using a subwoofer.

It’s definitely worth going with the instruction manual on this one, since using the wrong setting can throw the sound out of kilter. We hate to burst Focal’s surround bubble, but the Dimension doesn’t really immerse you that way.

Play Fast & Furious 6 and during the chase scenes as helicopters fly into frame, you’re aware of a slight back-to-front shift in sound but it doesn’t have the same impact as listening through dedicated surround channels.

But then again, it’s very hard for any soundbar to match a bona fide 5.1 system. What the Dimension does offer is a very solid, stable and impressive soundfield.

The bar has no trouble filling large spaces, and that includes our largest home cinema test room.

You’re presented with a huge expanse of sound, which the Focal creates effortlessly and packs full of detail.

Play the Reboot of Robocop on Blu-ray and, as our heavily armoured hero goes through his final training exercise in the huge warehouse, cracks of gunfire sound precise and powerful.

It wouldn’t take much for these effects to sound hard and harsh but the Focal falls on the right side of the line. The Dimension also does a good job of recreating echo around voices and giving dialogue a great sense of expression.

Given the bar’s dimensions, bass weight isn’t an issue. Sure, you could get more from adding a subwoofer, but as Robocop assaults OmniCorp HQ and battle ensues, explosions have enough force and heft to convince.

Even something less obvious, like Robocop’s footsteps, have a nice, solid, rounded, robotic crunch.

As his mind is being force-fed an entire criminal database, the Focal does a great job of communicating the tension and drama as it all becomes too much for Murphy’s brain to compute.

This shows the Focal’s impressive dynamic range, and its musical flair too. Switch to music, play Metallica’s Nothing Else Matters over Bluetooth, and the Focal shows great fluidity and finesse.

It’s fun to listen to and never distracting, which can’t be said for most soundbars out there.

Jumping straight in at the deep end with a premium soundbar is a bold move, but Focal’s Dimension delivers the goods in spectacular style.