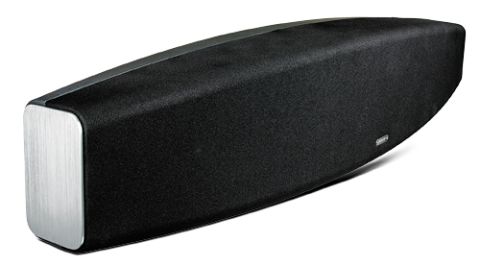 Best soundbar £800+, Awards 2013. Still great, but the fresh competition is ruthless and capable

The Monitor Audio ASB-2 was one of the first premium soundbars on the market. At a time when soundbars offered either features or sound quality, it gave us both. It justified its £1000 price tag, we fell in love, and it went on to win one of our 2013 Awards.

But a lot can change in a year. There are now quite a few expensive soundbars, and despite the old champ’s new price of £800, it must prove itself once again. Does it have what it takes?

The first thing that comes to mind is not the ASB-2’s performance, but its size. At 18cm tall and over 100cm wide, it’s hard to avoid. Put this in front of your TV and you might as well park a blimp there.

You’ll have to clear a shelf below the TV, or put it on a wall. The wall-mounting bracket isn’t included, but you do get a suitably large rubber pad to stabilise the bar on a shelf.

It’s not just perceived, however. You certainly get a lot for your money. That’s a recurring theme with the ASB-2. The hardware, for instance, will bring joy to anyone who likes to plug things in.

There are a generous number of connections: three HDMI in, one HDMI out, optical in, coaxial in, analogue RCA in, 3.5mm in, and sub out. AirPlay and DLNA compatibility means you can stream over your home network, too.

Sadly there’s no Bluetooth, but you do get a proper remote control with proper buttons. It brings up an on-screen menu if you’re plugged into a TV using HDMI. The menu is where you can tinker with various settings, including EQ levels.

As for audio performance, it’s time for some good news and bad news. The good: all the praise we heaped upon the ASB-2 a year ago remains perfectly valid. There’s an undeniable abundance of power and weight; this is an authoritative sound.

The sense of scale is impressive: a good spread of sound, even without the soundbar’s ‘3D Audio’ mode. You also get a superb level of detail no matter what you watch. From crashing and smashing, to sedate and emotive, the ASB-2 offers a subtle performance with drama and excitement.

The bad news for Monitor Audio is that the competition is fierce. The ASB-2 doesn’t do anything wrong on its own, but put it next to the latest and brightest and the cracks start to appear.

Focal’s Dimension, for instance, sounds a lot more expansive. The Yamaha YSP-2500 offers greater movie excitement thanks to its convincing surround sound. The Libratone Diva and Sonos Playbar can match and beat the ASB-2’s streaming skills.

Then there’s the Dali Kubik One, next to which the Monitor Audio is less expressive and detailed than we’d like, especially when it comes to voices. The ASB-2’s rich, weighty sound now feels thick and heavy in comparison, with the Dali offering a greater level of agility and articulation.

And so it is with regret that we must take away the Monitor Audio’s fifth star. It’s had a great run, but the competition is ruthless.