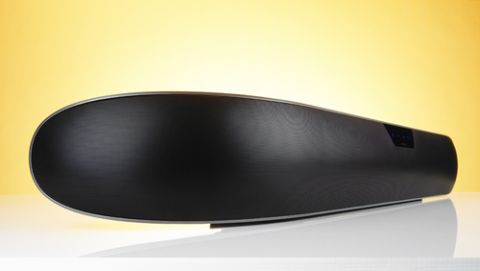 The Panorama 2 marks Bowers & Wilkins second attempt at a premium soundbar. We didn’t really bond with the original B&W Panorama – the level of sound quality and specification (notably the lack of any HDMI inputs) just didn’t reach the standards we expect from such a highly respected brand.

This version’s design and build quality are pretty much faultless. Fit and finish are excellent, which you’d expect given the price. The mirror-black stainless-steel shell wows with sweeping curves and its glossy finish, even if it attract smudges, smears and fingerprints with ridiculous ease (the supplied cloth will definitely come in handy).

At 14.1kg it’s a weighty unit, but there’s a heavy-duty bracket supplied in the box to help with mounting – the soundbar just slots on.

Beneath the grille lies an array of nine drivers. They’re a similar size to those found in the original model, but are in fact all new designs. B&W claims the new bass drivers allow for improved extension, dynamics and lower vibration, while the midrange drivers create greater dispersion and tweeter encourages better integration with the midrange.

The company has placed huge emphasis on getting dialogue right. That’s why five of the nine drivers (two bass, two midrange and one of B&W’s trademark Nautilus tube-loaded tweeters) have been dedicated to the soundbar’s centre channel. The remaining four drivers are deployed for surround-sound effects.

On the front of the unit there's also a proximity-sensing control panel and display, which bursts into life when you touch or waft your hand across it. It’s glows bright blue and has sensors for volume, input and toggling between the soundbar’s music and movie sound modes.

B&W has addressed former criticism by including three HDMI inputs on the back. Not only this, but the HDMI output doubles as an Audio Return Channel, so you can connect a compatible TV and beam its audio back into the soundbar down the one cable.

There’s also a subwoofer output should you require extra bass, and a 3.5mm/optical input for non-HDMI-equipped kit. At either end you’ll see a B&W Flowport, designed to tune low frequencies.

On-screen menus provide tone controls in addition to bass equalisation options depending on whether you’re table or wall-mounting. You can input viewing distance and offset the sound if people aren’t sat together, too.

The menus also give you the option to choose from three different settings (soft, medium and hard) to help compensate for different wall materials, which can effect how much the sound is absorbed or reflected.

It also comes with two sets of screw-in feet. These alter the angle of dispersion and to isolate the soundbar from any surfaces – the unit sounds messy and unappetising without.

Although the Panorama 2 has standard Dolby Digital and DTS decoding built-in, there’s still no provision for high-def Dolby TrueHD or DTS-HD Master Audio formats – unlike the Yamaha YSP-4300, which decodes both. It’s not the end of the world though: you just have to make do with the core Dolby Digital or DTS mix.

Play the re-booted Total Recall on Blu-ray and the B&W fires into life, creating a wonderfully detailed and direct sound. As the action unfolds the B&W integrates all the elements of the soundtrack into a cohesive, believable unit.

Gunfire and dialogue sounds crisp and precise and treble stays on the right side of sharp and incisive. But bass-rich explosions, while room-tremblingly powerful, can sound a touch tubby, especially at high volume.

Fed a LPCM signal, the Panorama 2 uses Dolby Pro-Logic II processing and B&W’s own tech to achieve a virtual surround effect, toggled via the remote or the touch-sensitive panel. The effect is mixed. Switch it on and straight away there’s greater width to the soundstage, but at the expense of focus and solidity. We recommend you keep it turned off and use music mode instead.

In this mode, the B&W shows it’s no sonic slouch. A quick blast of the Foo Fighters’ Monkey Wrench and the Panorama 2 does a great job of organising and defining the frenzied drum play and axe-work.

The speaker digs up a bucketful of detail to give Dave Grohl’s vocal its trademark gruffness, and yet still manages to sound clean, clear and packed with emotion. It’s a little disappointing, though, that the B&W hasn’t been equipped with some streaming functionality – even something as simple as Bluetooth would be nice.

The small, pebble-esque remote is virtually identical to those supplied with B&W’s wireless speakers and iPod docks. It’s been tweaked for the Panorama 2, however, letting you switch inputs and volume, and access the on-screen menus.

It’s a little fiddly and can be unresponsive at times – for a product at this price we don’t think it’s unreasonable to expect better.

The B&W Panorama 2 is an improvement on its predecessor and outguns many of its rivals for pure sonic ability. It's not cheap, but the improved level of functionality and focused sound more than compensate.