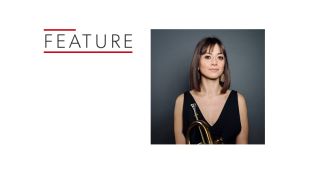 By its very spirit, jazz is a genre of innovation. The cliches of cigarette smoke and candlelight, sharp suits, obligatory blind man drinking bourbon in the corner, are never far from mainstream perceptions of the genre – but it has never been jazz's inclination to sit still. That way stagnation lies.

It follows, then, that a musician such as Yazz Ahmed – a British Bahraini trumpet and flugelhorn player, whose list of collaborators ranges from Radiohead to Lee "Scratch" Perry – would find it only natural to carry the medium in her own direction.

Her latest album, La Saboteuse, was a long time in the making – partly due to her incorporating techniques she learned working with other artists. Below, we find out how the record took shape, why hi-res audio is best and who she'd love to work with next.

What Hi-Fi?: Talk us through the process of writing and recording your latest album.

Yazz Ahmed: The album began with little duo sessions in a recording studio called The Cow Shed, and we recorded these short improvisations (me and Lewis Wright, who’s the vibraphone player on the album). These were to be interludes and little breathers in between each track. A lot of the equipment in that studio is quite sort of retro: there’s an old Copicat tape delay, and a lot of analogue stuff but transferred digitally. So the sound from that studio is very different compared to the other sections, which I suppose were more modern set-ups.

At the next recording session, four of us recorded whole pieces, and the next was six of us. So then I had all of this recorded material, and while I was sitting on these recordings, letting my mind breathe, I had to put the album on pause because I had a lot of commissions come in. But while I was writing all this music and meeting musicians like These New Puritans I got into different recording techniques: manipulating field recordings and found sounds, using electronics.

So I started to add more to these previous recordings at home. My garage has been transformed into a home studio and I have Logic and some microphones, and we got together and put overdubs on top, creating something very different to what a normal studio recording would sound like. It’s more than the moment of the performance - it became something more magical. So it’s been a long process, and it’s been a journey, and I’ve discovered many recording techniques on the way and my tastes have changed. It’s been very educational and very exciting.

WHF: You mentioned you were using a lot of analogue kit early on: was that by design, or mainly because it was at hand?

YA: Well I went to that studio because of the analogue equipment. I’d been there before for my first album, and I think the sound is warmer. I really like that, especially for the more intimate recording sessions. I really love the Copicat they use, so I took advantage of that. I purposefully chose it for those little duets.

WHF: So when you’re melding analogue and digital recording, then using the found sounds and electronics, what did you feel was the most important aspect of the sound to get right?

YA: It’s the overall: you’ve got all the recorded material, but it needs to all relate to one another. It’s important to get the same sort of vibe. We tried to create a sort of 3-D sound - one of the sound engineers works in film, he had a really brilliant imagination for how the album could progress, because it’s a story and he was really good at highlighting the journey. So the overall mix is really important.

WHF: Naim is putting the record out as a 24bit lossless WAV file for those who want it - how important to you is it that your music is heard in the highest resolution?

YA: It’s really important, so you can hear every little detail. We put so much effort into the actual sound and what you can hear, the clarity of the instruments and where they’re panned... there are some pieces where you feel far away then the music comes closer to you, there’s one duet we recorded so it felt like the vibraphone was massive and the top range was in one ear with the bottom range in the other year – and it just kind of transforms things.

WHF: You mentioned These New Puritans - you’ve also worked with Radiohead and Lee “Scratch” Perry. How did their approaches to recording differ?

YA: Since working with these people I’ve discovered electronics, I use a Kaoss Pad, and I’m being more creative with recording techniques. With electronics I can express myself in a different way. I bought the Kaoss Pad because of These New Puritans and one of the guys gave me a lesson, which was a lot of fun. It’s becoming part of my sound and I want to try and experiment with more electronics.

WHF: Has it changed your approach to recording, going from acoustic instruments to using more electronics?

YA: It has changed, definitely. I think there are more options with sound manipulation: you can build whole new different sound world. I suppose you’re quite limited with acoustic instruments: I love acoustic instruments, but there is more you can get out of them by adding different effects to them.

WHF: In that same vein, is there anyone you’d really like to work with, who you think you could learn a lot from?

YA: I’d love to work with Björk. I love the drum loops she makes. It’s quite otherworldly, and I’ve written a piece that’s inspired by those techniques.

A system for full spectrum

WHF: Moving on to your listening habits: what do you use to listen to music?

YA: Since my album is on vinyl, I though it was about time I got a turntable. So I went to Audio Gold and bought a Dual 506 turntable with a Nagaoka MP11 cartridge and a Rotel RA-500 amp, then an Onkyo C-7030 CD player from Richer Sounds.

Because the Rotel amp can connect to two pairs of speakers, we decided to connect our Alesis Monitor 1 studio reference monitors that were given to us years ago, and paired them up with a pair of Wharfedale Diamond speakers. It’s a really nice combination: the Alesis monitors add more depth and brightness to the sound, and the Wharfedales have lots of clarity.

Because of this I’m sitting down to listen to music more, and I’m listening more intensely, really getting inside whatever I’m listening to. It’s a really nice experience.

When I’m streaming, I have a Naim Mu-So, which is very powerful; it’s brilliant. Then when I go on tour I like to take a JBL Bluetooth speaker: I call it the music sausage, because it kind of looks like a sausage.

Then in my home studio, I use Tannoy monitor speakers, which were also given to us and we thought we’d use them in our studio. It’s a very, very warm sound, and they’re lovely.

WHF: So with that kit you bought, did you have a little shopping list of the things you wanted from the sound?

YA: Yeah, well it was kind of mixing up stuff that we had and adding to that. But I like to get the whole spectrum of whatever I’m listening to: the bass, midrange and high range. So the set-up I have in my sitting room is really intense, you can hear everything.

WHF: And what kind of music are you listening to, generally?

YA: It’s quite a mixture. Because I’ve got a turntable I decided to buy Fourth World, Vol. 1: Possible Musics by Jon Hassel and Brian Eno, and that sounds beautiful on vinyl. I’m a big fan of Jon Hassel’s and I thought it’d sound really lovely on vinyl, which it does.

I’ve also just discovered Flying Lotus, and I’ve been listening to his You’re Dead! Album through the Mu-So. I also love the music of Arve Henriksen, who’s a trumpet player as well, and I’m listening to Places Of Worship, which is a really beautiful album.

WHF: So are there albums you prefer to listen to on vinyl, or to stream, or is it just a case of what you pick out at the record shop and what you find online?

YA: It’s that, really, but I do like to imagine whether something would sound better on vinyl. Like the Flying Lotus album I’m really enjoying streaming, but some old jazz records sound really nice on vinyl, and I’m really happy about the quality of my album on vinyl. I actually prefer it. But I’ve a lot of experimenting to do with these different formats; it’s nice discovering these different sound qualities.