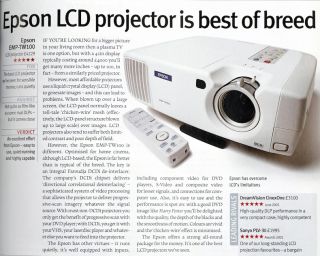 Back in 2002, LCD technology was still considered too compromised for serious home cinema use. We remember testing many a projector in which the limitations of clarity and lack of black depth were painfully apparent. It was products such as Epson’s excellent EMP-TW100 that changed people’s minds.

By the standards of the time, it delivered crisp detail and deep blacks the likes of which many believed LCD-display devices would never be capable. This was when DVD was booming, well before the days of Full HD, so the resolution of 1280 x 720 was more than adequate. Analogue connections ruled; there was component for the best-quality DVD replay alongside S-Video and composite for other, lesser sources.

Paying more than four grand today will buy you a very decent high-end projector. Back then, we considered the £4230 Epson a bargain, with serious high-end offerings starting at three times that price. Remember, this was a time when spending £8k on a top-end 50in Pioneer plasma was considered perfectly acceptable.

MORE: See all of our Epson news and reviews

Fast forward to today’s £1400 Epson EH-TW6600 and it’s amazing how much more we get, for so much less. The TW6600 delivers Full HD, of course, and is vastly better than its predecessor when it comes to all aspects of picture performance. It does 3D and even packs in a set of speakers.

We’re impressed by Epson. Back in 2002 it proved LCD projectors could be taken seriously. Ever since then it has worked hard to deliver better performance at increasingly lower price points. Judging by the EH-TW6600’s showing, it’s succeeding.