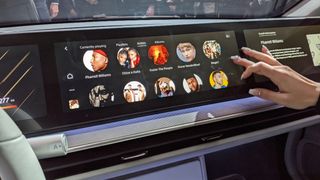 There's an AV revolution happening, but it isn't in your living room. Sure, CES 2020 was awash with flatscreen TVs, headphones and the odd Alexa-powered showerhead, but some of the real headlines were found on four wheels.

From a Sony concept car with 360 Reality Audio, to a speaker-less system courtesy of a Sennheiser/Continental hook-up, to an LG infotainment system with rollable OLED displays, there was plenty of in-car AV tech to enjoy.

One of the best in-car audio demos we were treated to came from Devialet. The French audio specialist was showing how its expertise in signal processing could improve the sound of a basic in-car system – without changing any hardware. Using the standard speaker set-up in an Audi Q5, we were blown away by the difference Devialet's own processing made.

MORE: Hands on with Devialet's vision for in-car audio

The Japanese giant created a major buzz at CES 2020, and not just because of the new Sony 8K TVs. Its Vision-S car concept took everyone by surprise, showcasing a range of technologies at Sony's disposal from camera sensors to flat panel screens. We were given a tour around the car's operating system and the Vision-S sound set-up, which contained enough speakers (33, we counted them) to give us a thoroughly convincing demo of Sony 360 Reality Audio.

We were also treated to a sneak preview of the Bose Performance Series Sound System for the 2020 Corvette Stingray. The car hasn't officially gone on sale yet, but we were given a quick blast of its punchy 14-speaker set-up with Advanced Staging Technology and Centrepoint 2 surround processing, which help with imaging and immersion.

Over at the Harman stand there was a wealth of car tech on display with particular attention paid to its Personi-Fi cloud-based audio platform. Harman sees this as a way to deliver more personalised listening experiences across a range of products from headphones to car audio systems.

Put your audio preferences into the dedicated Personi-Fi app and you can take your profile and upload it to any product, including your car.

Harman also demoed its ability to alter your car's audio character by unlocking and downloading acoustic profiles for different brands. We were presented with a demo where the standard system switched to a specific JBL audio profile. The result was an immediate shift to a more exciting and dynamic sonic character.

Inspired by the creatures brought to life in James Cameron's 2009 sci-fi flick Avatar, the AVTR concept (get it?) delivered a futuristic vision of how humans could interact with their cars, from biometric communications using your heartbeat, to projected menu systems and 3D graphics on its curved display module.

Blink and you'd miss the new Land Rover Defender, which was tucked away over on the Qualcomm booth. Arriving spring/summer 2020, the new-look Defender can be equipped with a top-of-the-range Meridian Surround Sound System with 15 speakers and 700 watts of amplification.

It features Meridian's Trifield sound technology which can take a stereo signal and blend it with centre and surround channels for a more cohesive and immersive sound. The Defender's brand new Pivi Pro infotainment system also includes a 10-inch touchscreen and DAB radio, and can support two Bluetooth connections at the same time.

LG had a couple of interesting in-car technologies dotted around the show. First, we were treated to LG Display's vision of the future of in-car infotainment. Needless to say, OLED displays featured heavily, including a monster 23in dashboard screen, a rollable OLED concept for rear passengers and a curved OLED touch panel with haptic feedback for controlling menus.