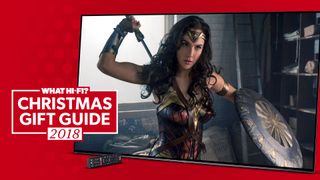 Know someone in your life who's mad about the movies?

We've collected a dozen film-related gifts – from home cinema equipment and 4K Blu-rays to movie memberships, film art and LEGO sets – that would be perfect for the film fan in your life.

Like one of these gift ideas so much you want it for yourself? Go on, put it on your Christmas wish list – we're not judging.

Marvel has been slow to release their films in 4K, but, happily, that's changing this November 26th. This Avengers 4K Blu-ray film collection consists of the main three Avengers films released so far: Avengers Assemble, Avengers: Age of Ultron, and Avengers: Infinity War.

Of course, you'll have to wait till April 2019 for the aftermath of Thanos' fatal finger snap to find out which of our superheroes survive (and don't) - which makes this collection not-quite-complete - but watching these epic blockbuster films in stunning Ultra HD 4K picture quality and Dolby Atmos surround sound will be far too tempting for the dedicated film fan to pass up.

Been eyeing up a new OLED telly but have resisted so far thanks to those eye-watering prices? Wait no longer: it's time to treat yourself to one heck of a bargain.

This superb Sony KD-55A1– Sony's first 4K HDR OLED TV – can now be picked up for nearly half its original price.

It's a fantastic deal for a gorgeous bit of kit. The 55in A1's inky deep blacks, punchy contrast and natural colour palette continues to wow us, so you'll have no problem making your friends and family go "oooh" and "aaah" right in time for the current BBC 4K trial of David Attenborough's Dynasties.

Snap it up quick before they're all gone.

Give someone the gift of a new film every day of the year thanks to this one-year subscription to MUBI. (That's 365 films for just £59.88).

With titles that stray sideways from the mainstream market, it's an appealingly fresh way to watch movies you otherwise might have missed.

Look at this glorious thing. With over 6000 pieces, this micro-scale LEGO set of the Hogwarts School of Witchcraft and Wizardry is packed with fun little details.

You can build the Great Hall with its stained windows, the Defence Against the Dark Arts classroom, the Room of Requirements, Hagrid's Hut, the Whomping Willow, and even a moving staircase. It comes with mini-figures of the four Hogwarts founders, the main trio and more - sure to delight any Harry Potter fan in your family.

What better way to flaunt your (or your loved one's) love of the silver screen by proudly displaying some framed artwork of your favourite flicks.

Not everyone can deck out their living room with a 5.1 speaker package or knock Dolby Atmos speakers into the ceiling. That could be on next year's wishlist...

For those short on space but big on wanting the full impact of your favourite film's soundtrack, this feature-packed compact Sonos Beam soundbar - which delivers bigger-than-it-looks performance - is a great solution.

The Art and Soul of Blade Runner 2049

Blade Runner 2049 wasn't just a successful film that built upon the cult original; it also looked absolutely marvellous. It won Oscars for best cinematography and visual effects, after all.

From set design, locations and props to make up, costumes and special effects – there is so much incredible work that goes on behind the scenes, and this coffee table book delves into the design process that went into developing the stunning landscapes, characters and futuristic dystopian world of the film.

It wouldn't be Christmas without turkey, trivia and tears as people argue about movie trivia answers.

This smartly-designed trivia game is the ideal after-dinner entertainment, and will suss out those who care way too much about the minutiae of movies and those who haven't seen that famous film everyone else in the world has. Outrageous.

Who says you can't buy yourself a gift this Christmas? Luckily, a Sky Q subscription is something the whole family can enjoy too, so it's not just because you want to watch football and Formula 1 in 4K picture quality.

Along with Sky's sports and entertainment packages (get the latter in time for the Game of Thrones finale next year), you can also bundle in a Netflix subscription as part of a 4K Ultimate On Demand TV package.

Just remember to subscribe to Sky Q Experience and get the 2TB box to watch in full UHD picture quality.