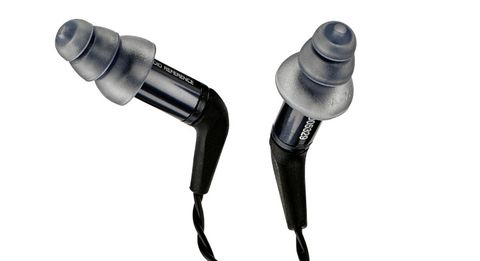 Hugely capable and informative, but some will crave greater comfort and low-end power

If you’re after resolution rather than cheap thrills, Etymotic is one of the first earphone brands to check out.

Not only does the name Etymotic Research Inc sound just like a science lab, but its new ER4SR headphones build on the success of the classic ER4 and ER4PT in-ears.

They don’t radically alter the company sound, but they do enjoy an upgrade in construction. Their presentation is immensely informative - provided you use the right tips.

The original Etymotic ER-4s lay claim to being the first in-ear monitor (IEM) earphones. To look at their latest incarnation now, it might seem little has changed in the 25-odd years since the ER-4s first appeared.

They are still slightly strange-looking tubes, longer and thinner than your average IEM. One worthwhile difference over the originals is that the cable, finally, is removable.

The Etymotic ER4SR’s metal tubes can be pulled off the cable to reveal the MMCX connector keeping the two parts together. Using metal for the earpiece shell rather than plastic is another upgrade, although we still don’t fancy their chances if caught between tarmac and a size 10 shoe.

In terms of tangible upgrades, the Etymotic ER4SR represent a slow crawl towards modernity - and their design remains odd. Long enough to stick out of your ears like tiny joysticks, Etymotic continues to rely on hardcore tips to provide isolation and a solid fit.

You have a choice of foam, which seems a little firmer and harder than standard Comply, or a triple-flanged silicone tip.

The foam tips provide fantastic isolation, comparable to that of a custom-fit earphone, but we’d still recommend using the brain-tickling triple-flanged pairs. The foam tips come close to ruining the sound.

They are not the most comfortable in-ears, and not all will like the rather invasive triple-flanged tips we recommend using. However, once you learn not to constantly fiddle about with their position, the fit is perfectly workable.

One leap Etymotic hasn’t yet made is that of accepting the concessions that come with phone use. The cable has no remote, which is common among purely audio-focused earphones. The cable itself is braided between earpiece and the cable join, and is a moderately thick cylinder beyond that. It’s reinforced with Kevlar, just as with the ER4PTs.

You get a semi-hard case in the box, one with little pockets for the various tips and the included 6.3mm adapter.

The Etymotic ER4SR are, alongside the ER4XR, one half of a new duo of Etymotic earphones. These are the ultra-accurate option, the SR standing for ‘studio response’.

The ‘XR’ stands for extended range, referring to boosted bass designed to make the signature more palatable for the widest possible audience.

On first listening, we use the foam tips with the Etymotic ER4SR and are concerned Etymotic may have run this revered series into the ground.

There are strange high-midrange and treble peaks that are not only harsh and ultra-sibilant, but make the mid-range tone unnatural.

After a few days of listening and running in, hoping the sound will even out, we switch to the silicone tips and the presentation instantly turns around. The peaks evaporate along with the unnatural tonal skew.

The performance we expect from an ER4-series earphone returns, so the immutable lesson is: use the silicone tips.

With them in place, there’s almost nothing to dislike about the Etymotic ER4SRs' sound. It’s not clinical, nor as cold as some of Etymotic’s classic models.

Bass detail is fantastic, its control is perfect - both taut and fast. It’s a little reserved though, meaning bass obsessives may want to look for something with greater low-end power.

At times it’s possible to regard the bass almost as an intellectual exercise, rather than as an assault on the eardrums, but it’s easy to analyse the anatomy of it.

For the ER4SRs the midrange is the strongest area, and a reminder of why spending over £300 on something that weighs just a few grammes (and isn't made of gold) isn’t automatically madness.

Detail is superb, without ending up in the potentially caustic granularity some headphones with supposedly revealing mids can be guilty of. It's the aural equivalent of an over-sharpened photo, but it's not something the Etymotics are prey to.

Treble is out-paced by that of the Jays q-Jays, which have a more pronounced and yet sweeter top end, although the Etymotics enjoy better mid-range definition.

As ever, Etymotic’s best headphones are unequivocal in their intent and uncompromising in their delivery.

These earphones are about insight, and if that’s what you’re after you can’t do much better.

More lively, larger-sounding earphones are available, but when the ER4SRs' sound sculptures stand up to this much scrutiny, the simple scale of the sound starts to matter less.

Their invasive fit won’t please everyone though, and just remember: don't use the foam tips.

See all our Etymotic reviews