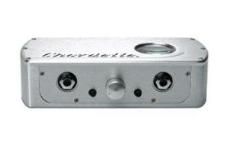 The Toucan has an unusual mix of features, but it’s an impressive performer

An high-end headphone amplifier with a built-in digital-to-analogue converter isn't something we've come across before. But should you need this blend of talents, the Toucan is a great buy.

It's part of a newly expanded Chordette range, which aims to deliver top-quality sound in small, beautifully made packages.

And the tiny Toucan certainly packs it in: there's two analogue inputs – an RCA plus balanced XLR – and USB digital input. Standard audio digital inputs, such as coax and optical, aren't offered.

Better than a budget DAC
That's a shame, as the on-board DAC is great. It's a big step ahead of budget units such as Cambridge's DAC Magic in terms of transparency and dynamics, and not far behind Stello's £750 DA100 Signature.

The Chord has two full-sized headphone outputs. Both can be used together – and, rather surprisingly doing, so doesn't dim the overall performance. That's great news, because this is a fine headphone amplifier.

The Toucan sounds pure and massively detailed. Straight from the box there's an element of edge and aggression, but given a few days worth of use this fades away leaving a very natural, unexaggerated sound.

From Dvorak to Drake, the Toucan takes all music in its stride, delivering it in a lively, entertaining and honest fashion.

Switchable filter
There's a switchable filter to make headphone imaging sound a little more natural. It makes the sound less demanding, but also less transparent; we left it off.

You'll need top headphones to make the most of this Chord: something like the £250 AKG K701 should be a bare minimum.

Our only gripe is that our test sample – one of the first off the production line – had an overly sensitive volume control.

The Toucan is a tiny, two-in-one triumph – we can't wait to test the rest of the range.