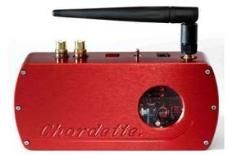 It's great to see a specialist hi-fi company try something different. The Chordette Gem is a fine product

Whoever said that DACs had to be boring-looking, basic boxes, clearly never told Chord.

With the Chordette Gem, the company has come up with a design that not only looks space-aged, but also boasts high tech features like Bluetooth. What's more, it sounds great.

This is a development from the previous Gem: it benefits from the inclusion of ‘APT-X': a new Bluetooth technology that's expected to pop up on all sorts of mobile devices in the very near future.

Standard A2DP devices will continue to work with the Gem as before, but you can already buy a range of Sennheiser dongles to make your current device APT-X enabled.

Connecting the Gem to a laptop wirelessly (with help from one of those APT-X dongles) brings audio quality extremely close to that you get from its USB socket – which is, to say, brilliant.

This nippy DAC isn't for everyone, of course: it's pricier than many comparable devices, and if you don't want the Bluetooth functionality, you may feel you're not going to get your money's worth.