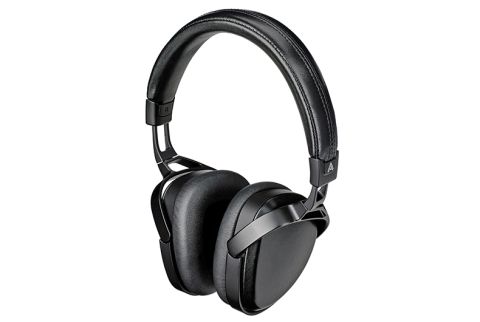 The Audeze Sine Lightning headphones are loud and upfront, but not subtle, engaging or comfortable enough to justify the price

With Apple heralding a turning point in headphone design by removing the trusty 3.5mm headphone jack from the new iPhone 7, we can be thankful that headphone companies are already one step ahead.

At £450, the Audeze Sine Lightning headphones are definitely on the more expensive end of the headphone scale.

But it’s not just the Lightning cable that makes these Audeze headphones unusual: they also use planar magnetic technology instead of conventional drivers, which is still a rarity for headphones.

The first thing we notice about the Audeze Sines is the rock solid build quality. The tough aluminium frame, sturdy leather finish and the thick, flat cables are built to last.

They’re touted as portable cans, and while they’re definitely not as big as Audeze’s pricier headphones, such as the EL-8 (or EL-8 Titanium), they’re not quite as convenient as rival portables.

The ear cups fold down flat, but they don’t swivel inwards like AKG or B&W headphones, making it awkward to carry about when not wearing them. That sturdy build makes them rather heavy, too.

Slip them on, and you’ll find the Sines will either sit right on your ears, or that your ears will slip inside the confines of the leather cushions. If you’re in the latter group, you’re in for an uncomfortable ride as your ears will be pressed against the inner frame of the headphones.

The clamping pressure on our samples was also a little too high, which affected our long-term comfort.

The main headline for the Audeze Sines is that Lightning connecter at the end of its ‘Cipher Lightning cable’. But what’s more pertinent is the 24-bit DAC and amplifier – it’s built into the same bit as the three-button remote and mic.

The DAC takes over clocking duties from the iPhone, reads the digital music data coming through the Lightning port, and also operates as a headphone amplifier.

It’s worth noting that the DAC will draw a little power from your iPhone when playing, but we don’t notice a catastrophic drain on the battery.

You won’t be able to listen to music and charge your phone at the same time, though (without an adapter), as both functions use the Lightning connector.

Thankfully, the Sines also come with a conventional cable that ends in a 3.5mm plug – crucial for when you want to listen to those 'old-school' products that still have a 3.5mm headphone jack.

Both cables are thick, flat and sturdy, but like the Audeze cans themselves, they’re built for strength and durability, not for aesthetics.

They can pick up some dust and become grubby over time, especially the grippy ends where the cable plugs into the headphones.

Using an iPhone 6S, we play Radiohead’s The National Anthem, and grin with delight: it goes loud. Really loud.

For any iPhone user who’s used to tapping the volume up button in vain, this significant boost is arguably the Sines’ best aspect.

It means you can really get a thumping beat going when listening to Blackstreet’s No Diggity, and feel the full, ominous power of that iconic tritone riff in Black Sabbath’s Black Sabbath.

The upfront, immediate character of the Sines is instantly rewarding, greeting you with layers of clear detail in a spacious presentation.

The edges of notes are cleanly etched out, with guitar strums neatly defined, and drum snares hitting the high notes with just enough bite.

The Sines are discerning enough to convey Ozzy Osbourne’s eerie, grand vocals and the electronic-tinged nuances of Rihanna’s singing.

But once you get past that attention-grabbing first impression, you notice that the upfront character comes at the expense of subtlety in dynamics and rhythm.

That meaty, brooding bassline in The National Anthem sounds big and muscular, but it needs to be tauter and dig deeper to really get under your skin.

We want the Sines to punch better with more impact and convey the grungy dirtiness to the edges of that bassline, rather than pushing everything forward in the name of excitement.

A build up of suspense is missing when we listen to the gorgeous Light of the Seven from Game of Thrones’s series six soundtrack using the Lightning cable.

The piano notes glide along and the strings come sweeping in to up the ante, but it’s lacking that mournful tug at your emotions.

You won’t be able to test this on the iPhone 7, but you do get a more engaging performance when plugging the normal 3.5mm cable into the iPhone 6S’s headphone jack.

The loudness goes, but the start and end of notes are more defined, there are more layers of detail between each note, and it times better.

Musically, it’s a more interesting listen than through the Lightning cable.

Audeze has put the right foot forward with its premium-quality headphones in a post-3.5mm headphone jack world, but we can’t help being disappointed.

The solid build quality and the robust sound will appeal to some, but it’s not the most comfortable, subtle or precise sound for the money.

The options for wired headphones to use with the new iPhone 7 are limited, but there are plenty of excellent wireless alternatives.

Headphones such as the B&W P7 Wireless (£320) and the Sennheiser Momentum 2.0 Wireless (£380) combine style, comfort and superb sound quality for a good deal less than the Audezes’ £450 price tag.

And you won't have to use multiple cables either.

See all our Audeze reviews