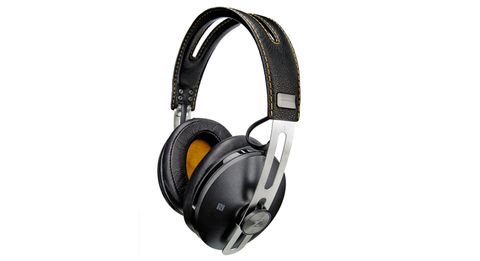 When Sennheiser launched the first range of Momentum headphones in 2013, it showed a fashion-conscious popular headphone market that style and substance didn’t have to be mutually exclusive.

Skip forward six years and the range is still going as strong as ever. These second- generation wireless noise-cancelling headphones were reviewed when they launched back in 2015 and were deemed some of the best wireless headphones you could buy for the money. Read on for our original review of these excellent headphones.

From a pure design perspective, the Momentum 2.0 Wireless are as desirable as ever. At first glance, they appear similar to the first generation, sporting an all-leather headband and elegantly sculpted earcups on adjustable stainless-steel rails.

Look closer though, and you’ll notice there have been some tweaks. The frame is now collapsible, allowing them to fold down for better portability, while the earcups are bigger to ensure a better over-ear fit.

The soft leather earpads are thicker too, making them even comfier than before. We have worn them for hours at a time without feeling the need to remove or adjust them, and our ears have never become overly warm during use.

Obviously the headline features of this model over the standard Momentum 2.0 are aptX Bluetooth and active noise cancellation, both of which make their debut here with excellent results.

You’ll get around 22 hours of stable wireless music playback with noise cancellation activated (more at a modest volume level), and should you drain that you can attach the included cable and continue listening passively (passive mode is available when wired only).

We do wish the power light stayed on constantly when they’re powered up though – without it it’s easy to forget to turn the Momentums off and waste battery life in the process.

You’ll find all the controls for power and music control on the right earcup. The power button doubles as the pairing button, with the ability to remember up to eight different devices, or you can use NFC pairing if your device is compatible.

There’s a multi-function button that shifts up and down for volume adjustments, and can also be depressed to perform varying functions. Once you remember which combination of presses does what, it’s a handy option.

MORE: Bose vs Sennheiser vs Sony: which are the best wireless noise-cancelling headphones?

The noise-cancelling on board is Sennheiser’s proprietary NoiseGard technology, and it does a really good job of dulling down the noises of the world around you.

You don’t get the almost eerie levels of silence provided by Bose’s QC25s, but you also don’t get that odd feeling of pressure on your ears when noise cancellation is activated.

Fire them up for a listen and we’re greeted with the Momentum sound signature we know and love, which hasn’t lost any of its verve or excitement in shedding wires. In fact, we’re really impressed at how close the wired and wireless performances are. Things are a little tighter with the wire attached, but you certainly won’t feel like you’re missing out when you go wireless.

It’s a rich, full-bodied performance with a level of composure and refinement that we aren’t always used to hearing from Bluetooth headphones.

The low end is weighty but detailed, giving the pulsing bassline of Jay-Z and Kanye West’s No Church In The Wild plenty of punch without ever sounding boomy or drowning out the rest of the frequency range.

In fact, despite its strong bass response, it’s in the midrange that we think these Sennheiser headphones really shine. From vocals to guitars, there’s a level of subtlety here that uncovers stacks of fine detail, with plenty of clarity to boot.

In Rihanna’s FourFiveSeconds, vocals are expressive and focused, while Paul McCartney’s guitar strums have real depth and texture to them. Dynamically the Momentums don’t miss a beat either, timing superbly and delivering a wonderfully enthusiastic, up-front presentation that keeps you hooked on the music track after track.

The high end is as well judged as the rest of the frequency range, possessing an open, articulate treble that shows no hint of harshness, even with lesser-quality recordings. The Momentums have always been forgiving and that quality has continued in the second generation.

They also offer an impressively spacious presentation for a pair of closed-back headphones, giving instruments and performers plenty of room to breathe, even in the busiest of recordings.

Take a call while wearing the headphones and, thanks to a separate microphone dedicated to voice calls built into the earcups, you don’t need a mic on the audio cable to be heard. We find calls to be clear and stable, with callers always able to hear us without issue.

In the Momentum 2.0 Wireless, Sennheiser has delivered an endlessly listenable, hugely likeable pair of headphones with new features and design tweaks that make them better than ever.

£380 wasn't an inconsiderable amount to spend on a pair of headphones back in 2015, but since we tested the headphones the price has come down closer to the £300 mark.

If your budget can stretch, you’ll be well rewarded.