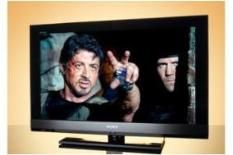 There are some things that people will pay more for to receive less of – and the depth of a new TV is one of those things.

When their vital statistics are laid out side-by-side, there's very little the Sony KDL-32EX703 offers that the same size but cheaper KDL-32EX503 doesn't.

The biggest difference is that this set has edge-arrayed LED backlighting – and uses the space saved to reduce its depth by almost 4cm compared with the EX503, to just 6.5cm.

A change in the backlighting
The remote control, the on-screen menus, the online content are all shared, but no less thoroughly sorted for it. Overall specification, backlight aside, is broadly similar.

The two sets also share a common pride of ownership that Sony is so adept at providing.Thankfully for reader and writer alike, there are some differences when it comes to performance.

TV reception is efficient and stable, even if the Freeview HD tuner could show a bit more resolve when signal strength is middling, and there's a familiar solidity to the way the 'EX703 deals with movement of all kinds.

Picture noise is controlled well, and edges are drawn with smooth positivity. And there's a sense that the 'EX703 generates greater depth and detail during dark/black scenes.That's confirmed when the 'EX703 upscales a DVD of All About My Mother.

Black tones are impressively deep, but not to the detriment of overall detail, and motion handling is again worthy of praise. It could show more dynamism where contrast is concerned – but in all other respects it's a top-table performer.

The colour-balance is spot on too, though contrasts are slightly hampered by the same relative lack of punch.

When displaying an entirely black screen the Sony a) is very black indeed, and b) betrays just a hint of backlighting unevenness – a hint, mind, and it's never an issue with a picture on screen.

The 'EX703 has the familial sound; ‘grating' is too strong a word, but it's definitely in that direction. This is a fine TV regardless, and for some its additional ability over the 'EX503 will make the premium worth it.