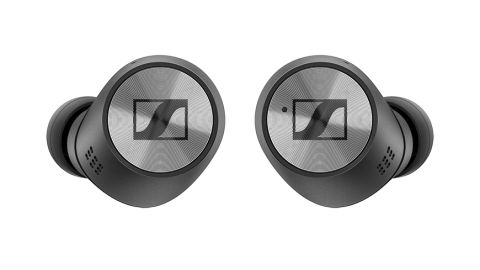 These Sennheisers are among the most refined-sounding wireless earbuds we’ve tested - if your budget can stretch this far, you won’t be disappointed

The original version arrived at the back end of 2018, delivering a balanced sound, a decent smattering of features and good battery life – all adding up to a solid, if pricey, package.

Fast forward to 2020, and the arrival of the second generation version, the Momentum True Wireless 2. This new pair promises a range of improvements but, with the wireless earbud market having moved on thanks to new rivals from the likes of Amazon, Apple, Sony and Samsung, the question is whether Sennheiser has done enough.

Sennheiser hasn’t exactly gone back to the design drawing board, although the Momentum True Wireless 2s boast a few aesthetic differences from their predecessors.

The earpieces have been trimmed down slightly, making them more svelte and a little less bulky in your hand and your ears. Fitting them is still a case of sliding them in, then twisting to lock them into a decent seal.

They’re smaller and protrude less than the Sony WF-1000XM3s, but aren’t quite as discreet or slimline as the diminutive and featherweight Samsung Galaxy Buds Pluses.

Shaving a little off their dimensions has also had the knock-on effect of making the new Momentums feel more comfortable over long listening sessions. The original Momentum True Wirelesses could start to apply unwanted pressure to parts of your ear after a while, but the new buds feel fine during five- or six-hour listening sessions.

There are four pairs of silicone eartips of various sizes in the box, plus a short USB-C charging cable. A selection of foam tips would be nice, especially at this price, but we don’t have too much trouble getting a good seal. The tips also effortlessly click into place, making switching them around painless. The tip and earbud combinations of some rivals require wrestling into position.

The outer surfaces of each earpiece once again double as touch controls that can be used to carry out various functions from controlling playback to activating Google Assistant or Siri.

The big news for the Sennheiser Momentum True Wireless 2 earbuds is the addition of active noise-cancelling. A number of premium and a few more affordable models are now offering the technology so it’s good to see Sennheiser coming on board.

It’s a useful addition and you can definitely hear the benefit – turn it on and it sucks out the rumbling and background chatter of the outside world. Sony’s noise-cancelling just has the edge, but the Sennheisers aren’t a million miles away.

To toggle the noise-cancelling on or off, you can use the touch-sensitive controls or flick the switch in Sennheiser’s Smart Control app for iOS and Android devices. A companion app is increasingly common in the wireless headphone market and here it’s worth dipping into for a number of reasons.

For starters, you can customise those touch controls to carry out a range of functions. The left touchpad handles playback – one tap to play/pause, a double-tap to skip forwards and a triple-tap to skip back.

A similar combination of taps on the right earbud enables the voice assistant, turns the Transparent Hearing (ambient noise control) on and off, or disables the active noise-cancelling. The controls are more responsive and easier to get along with on the new version than the old.

Turn the volume down by pressing and holding on the surface of the left earbud or turn it up by following the same procedure on the right earpiece. If you aren’t happy with the way the touchpads are set out, you can configure your own control presets on the app.

In theory you can assign the press and hold action to other functions, but at the time of testing we encountered a bug that wouldn't allow you to change them back to adjusting the volume without resetting the touch controls to their default setting. Sennheiser assures us they’re working on a fix that will be available when the headphones arrive in stores in April.

It’s a good way to squeeze extra functionality out of the headphones and handy if you have become used to a different control set-up. The app also allows you to see the amount of battery left to play with, as a single figure rather than an individual percentage for each bud.

Sennheiser’s fabric-covered charging case makes a return for the second-gen model. It carries 21 hours of charge, which can be used when the buds are running low. There’s an LED indicator on the front of the case that changes colour (red, green or yellow), depending on the amount of juice left in the earbuds or the case.

The buds should be good for around seven hours from a single charge as standard (compared to four on their predecessors), although having the noise-cancelling feature switched on drains the battery quicker. All told, battery life compares well to that of the Sony WF-1000XM3 (six hours, plus 18 from the case) and the Apple AirPods Pros (five hours, plus 19).

The case looks identical to the original True Wireless case, apart from the grey fabric having been replaced by a black fabric to match the earbuds. There is also a new white finish for the Momentum True Wireless 2, complete with matching carry case. This finish won't be available at launch, but Sennheiser says it should be out in May.

We play Vampire Weekend’s tub-thumping track Diane Young, and the Sennheisers are off to a great start. Drums are thwacked with a suitable amount of power, but they’re taut and controlled with a fine sense of precision and focus.

There’s plenty of space in the soundstage as the guitar and percussion jostle for position. This can sound particularly rowdy and raucous through lesser earbuds, but with these headphones it sounds refined and mature. No element really sounds rolled off, with highs and lows dispatched with equal force.

With high frequencies, the Momentum True Wireless 2s sound a bit more composed than the Sonys and beat the Apple AirPods Pros hands down. And, with the help of the noise-cancelling, they’re able to dig out an impressive amount of detail from any genre of music you introduce them to.

The Sennheisers also show good control over low frequencies. Play Kanye West’s Welcome To Heartbreak and the pounding bassline sounds powerful and authoritative. There's no fat around the edges. Each drum thwack sounds taut, precise and drizzled with texture. The WF-1000XM3s, though, have the edge when it comes to rhythm and timing, capturing the stop-start momentum of the track with greater accuracy and delivering it with greater aplomb.

The Sennheiser's character works well with video content viewed through YouTube and Netflix too. Watching Stranger Things, as the Mind Flayer faces a barrage of fireworks in Starcourt Mall, you can hear the detail in each explosion from the initial impact to the subtle fizz as it dies out. Dialogue comes at you loud, clear and with no lip-sync issues.

Time waits for no tech, especially in the world of wireless earbuds. Battery life is ever-increasing as new models arrive on the scene, as is the list of features on offer. The Sennheiser Momentum True Wireless 2s, to their credit, have evolved just as we hoped they would.

They are more comfortable and nicer to use than their predecessors, battery life is better and noise-cancelling is now included as part of the package. They’re easy to live with and you could happily listen to them for hours on end without reaching for the pause button. If your budget allows, your ears will be handsomely rewarded.