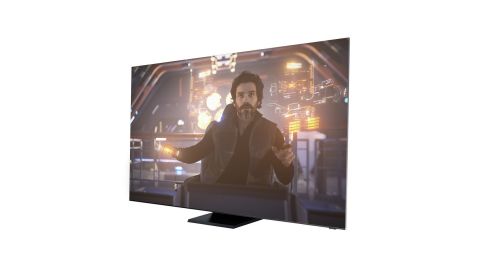 “8K demand surpassed expectations in 2019” according to Samsung. We don’t know what those expectations were – to sell more than 100 8K TVs? 1000? 10,000? – but it means only one thing: Samsung is relentlessly pushing 8K TVs again this year.

It has every right to. For one, its 2019 Q900R/Q950R 8K QLED TV was, while arguably premature and overshadowed by the better value of its 4K QLED flagship, a great telly. For another, 8K TVs are now hot property across the industry and Samsung is no longer the only kid in the playground.

For 2020, Samsung has two or three 8K QLED TV models to choose from depending on where in the world you reside. The UK gets the Q800T and Q950TS, while the US also gets Q900TS model.

We don’t wish to undermine Samsung’s picture achievements for 2020, which we’ll come to shortly, but it’s hard not to jump straight in with the Q950’s beautiful, headline-grabbing design.

One day, TV bezels will be a thing of the past, considered a nuisance of a bygone age. Until then, most of us will have to put up with them - not the buyer of a Q950TS though. Thanks to Samsung’s new zero-bezel ‘Infinity Screen’, 99 per cent of its facade is screen.

What's more, despite it having a direct, full array backlight set and eight speakers integrated into its frame, the Q950TS is only 14.9mm thick. Concept TVs aside, the Q950TS is undoubtedly one of the most gorgeous TVs we’ve ever laid eyes on.

Our first impressions of its picture, derived from demos of Samsung's own 8K and 4K video content, don’t stray far from superlatives either. While Samsung’s focus for its 2019 QLEDs was on enhancing blacks and viewing angles, this year is all about improving brightness and fine details.

To that end, the Q950TS is powered by the next generation of the company’s 8K Quantum Processor, which is capable of some serious upscaling alchemy.

While last year’s Q900R used machine learning to create a formula for upscaling sub-8K content to its panel, the Q950TS advances the upscaling process by adding a ‘deeper’ algorithm on top. It’s based on a pre-learned neural network (a limitless, continually expanding database of images) with numerous layers of algorithms, each of which provides a different interpretation of the data. The TV can use these to help restore fine detail and in turn create a realistic upscaled picture. This upscaling is done on a pixel-by-pixel basis, too – remarkable when you consider how many thousands of them are in the panel.

Samsung demonstrated to us its Q950TS next to the 2019 Q900R, and indeed the new set revealed notably greater texture – tree bark was more convincingly etched and cloudy skies had greater detail and depth. These extra details sharpen up the picture without looking unnatural. Considering the upscaling tech uses an ever increasing number of images and algorithms it should get only more and more accurate as time goes by.

The other big picture enhancement concerns brightness. The Q950TS's Full Array Local Dimming (FALD) system is now more efficient, thanks to Samsung’s new Local Power Distribution strategy. Essentially, it works to redistribute power from the darker areas of the scene/panel to the brightest areas that need it most. Because of that redistribution, Samsung claims highlights can go up to 20 per cent brighter without increasing power consumption. Samsung was quick to show that the Q950TS actually draws slightly less power overall than the Q900R.

While it's true that YouTube, Vimeo and Rakuten streaming services have committed themselves to delivering 8K content and that HDMI 2.1 is capable of transmitting 8K at 60fps, there’s no denying that the 8K ecosystem is still in its infancy.

One of the forecast problems of streaming 8K is the bandwidth it requires, but Samsung claims to have solved this particular issue with its AI ScaleNet technology. Promising on paper, it works to scale down 8K material so it can be transmitted at the reasonable bandwidth that’s required for 4K (10-15mbps), and then scale it back up to 8K again. Naturally, the Q950TS harnesses this tech – Samsung says it’s capable of restoring 95 per cent of an 8K image through this method. We’ll have to wait to see if service providers use it too.

Another TV tech theme for 2020 is to improve picture performance according to the conditions of the room in which the TV is placed. LG and Panasonic are supporting Dolby Vision IQ for enhancing Dolby Vision content depending on room conditions, but Samsung is implementing an ‘environmental enhancement’ feature of its own.

Adaptive Picture+ mode works to optimise the picture automatically, based on the lighting of the room conditions, and apparently goes beyond simply tweaking brightness levels. Turn a light on or off and after a second or two the Q950TS (and the recently reviewed QE65Q95T) adapts to the change in conditions, and indeed does ensure the picture remains clear and coherent.

The sonic equivalent of Adaptive Picture+ is Adaptive Sound+, which aims to improve the clarity of voices when the TV detects an increase in surrounding noise. That’s just the tip of the iceberg when it comes to new sound features for the Q950TS, though.

For 2020, Samsung has introduced OTS (Object Tracking Sound), which aims to better pinpoint and ‘track’ sounds on the screen in order create a more immersive and consistent soundfield. The TV achieves this by positioning a soundtrack on a horizontal plane, analysing it and then sending specific sounds to specific speakers on the TV.

The 4K Q95T that we've just reviewed has the standard version of OTS, but 8K models such as the Q950TS get OTS+, which adds speakers on the sides of the set for added sonic width. In total, there are eight speakers secreted in the chassis: a tweeter and midrange on each side, two tweeters at the top, and woofers at the bottom.

Thanks to the new Q-Symphony concept, the Q950TS will also work in unique harmony with one of Samsung’s 2020 Q-series soundbars. Rather than the TV speakers being muted when the soundbar is connected, they're used in conjunction with the drivers in the soundbar. In our demo, the soundbar played the front channels of the music signal while the TV’s top speakers played the surround channels, and the soundfield undoubtedly had a much greater sense of space to it.

Last year we concluded that Samsung’s 8K TV, while very good, “doesn’t quite convince us to take the 8K plunge just yet”. Surprisingly, the drawback of the Q900R wasn't its upscaling, which was exemplary, but its colours, which were less vibrant than those of its Q90R 4K sibling. With there being no 8K content available at the time, we had to conclude that opting for the much more affordable 4K model was the sensible choice.

Seeing that upscaling isn't an issue, there's no reason that one of Samsung's 8K sets shouldn't be at least as good as its best 4K model. This year that's the Q95T, which we've just reviewed and found to be excellent.

The Q950TS boasts lots of upgrades over the Q95T besides simply resolution: it's got more dimming zones, it can go brighter, and it's got a more advanced sound system just for starters. It should be a better telly with all of your content.

That said, it's also double the price of its 4K sibling, and the lack of native 8K content will continue to make that seem a high price to pay. Can its broader performance upgrades justify the extra outlay? We'll need to get a final sample into our testing rooms to be sure, but we're so far cautiously optimistic.

Samsung TV lineup 2020: everything you need to know