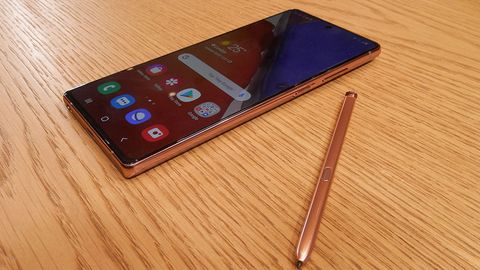 The new Samsung Galaxy Note 20 has got its work cut out. It’s getting harder and harder to make your flagship phone stand out from the crowd. The fever pitch of hype and excitement around smartphones reached its zenith a few years ago now, when the step changes in technology and features really did come thick and fast.

The release schedule may not have slowed, but the advances - especially those to really catch consumers eyes - certainly have. In fact, the more affordable end of the market has stolen the attention now, where “flagship specs at a budget price” has become a reality.

But a new Samsung Galaxy phone, along with a new iPhone, is still a big deal - and, has been the case in previous years, this could be the best Android phone on the market. So that’s not to be sniffed at.

This year we have two new 5G Note phones, the Samsung Galaxy Note 20 and the top-spec flagship, the Galaxy Note 20 Ultra. Can they get us hot under the collar for a flagship phone again?

You can pre-order the Samsung Galaxy Note 20 from Samsung in the UK and Australia right now, while US pre-orders go live at midnight on Thursday, 6th August. The phones go on sale on 21st August.

And if you pre-order a new Samsung Galaxy Note 20 or Note 20 Ultra 5G, you can claim a Galaxy Gaming or music reward.

These phones follow the naming convention of the Galaxy S20 range, which launched at the start of the year, jumping from the Note 10 to the Note 20, and adding an Ultra model as the true flagship.

The main differentiating feature of the Note over the S range has been the S Pen stylus and the larger size screen, and that remains the case. But there’s plenty more here to separate these new Note 20 phones from both their predecessors and the S20s, from a larger battery, changes to the camera, and some very interesting display upgrades, which promise to make them the brightest phones on the market.

First up: these phones are big. Both the Galaxy Note 20 and Note 20 Ultra have bigger AMOLED screens and are bigger overall in size than the last generation models. The Note 20 has a 6.7-inch FHD+ Flat (2160 x 1440 resolution), 20:9 aspect ratio, 60Hz screen. It’s 10mm taller and a few millimetres wider and deeper, and weighs a not inconsiderable 20g more than the Note 10.

The Note 20 Ultra blows that out of the water with a 6.9-inch WQHD+ Edge (2560 x 1440 resolution, 19:3:9 aspect, Adaptive 120Hz screen. You can add another 16g to your pocket with this one, plus a few millimetres on each dimension. The main reason for that extra weight is the glass display, the first in the world to use the latest Gorilla Glass 7 (Victus) on the front and back, for extra scratch-resistance.

Holding the phone you can definitely feel the extra weight - and we think an extra feeling of premium quality comes with it. It’s not too heavy - phones remain pretty light considering the tech packed inside - but instead just helps differentiate the models and offer an upgrade for those who want it. By contrast, the back of the Note 20 is "reinforced polycarbonate", also known as plastic.

You’ll also have noticed the display on the Note 20 Ultra is “Adaptive 120Hz”. This 120Hz refresh rate was first seen in the Galaxy range on the S20 and brings with it the promise of smoother animations, video and games. The ‘Adaptive’ element means the phone will switch automatically between 60Hz and 120Hz to best suit the content, which is a neat feature but not the variable refresh rate holy grail some superusers want to see.

While it’s great to see a 120Hz screen on the Ultra, it’s a shame not to see it on the standard Note 20, too. That said, it’s likely to be gaming that most benefits from this feature so if that isn’t a key feature for you, it may well not be an issue.

Last but far from least, the new Galaxy Note 20 phones come in some fresh ‘Mystic’ colours, which we rather like. The Note 20 can be yours in Mystic Green, Mystic Bronze or Mystic Grey, while the Note 20 Ultra is available in Mystic Bronze, Mystic Black and Mystic White. We like the shades and the matt finish. We’d go for a Mystic Bronze.

Camera technology has become the key battleground for flagship phones in recent years, with the number of lenses and megapixels rising at a rapid rate. The Note 20 Ultra continues the trend, albeit not offering a leap over the Galaxy S20 Ultra. There’s a 108MP wide lens, as seen on the S20 Ultra, as well as a 12MP telephoto, with 5x optical zoom, and a 12MP ultra-wide.

Step down to the Note 20 and you have a 12MP 2PD dual pixel wide lens, a 64MP telephoto lens with a Hybrid 3x zoom, and a 12MP ultrawide. Both feature 10MP 2PD front lenses. All that for a point and click picture of your dinner…

Clearly for serious smartphone photographers there’s plenty to pore over there but with the flagship Note 20 Ultra featuring the same cameras as the S20 Ultra, it’s not a game-changer in the snapper department.

Under the hood, in terms of RAM, ROM and removable storage, it’s the same as the previous generation. So you have 12GB and 8GB RAM respectively, the option of 512 or 256GB memory on the Ultra, plus a microSD card slot, while the Note 20 sticks with just 256GB.

With the choice of processor, comes some controversy. The Note range gets a processor upgrade, but it’s the same as Exynos 990 chip as on the S20 in the UK and Asia, to many peoples’ disappointment who see Samsung’s Exynos offering as inferior to Qualcomm’s Snapdragon chips. The twist in the tale: Note 20 Ultra models in the US will get the Snapdragon 865+ chip, due to Samsung’s preference of diversifying the supply of parts.

The S Pen has had an upgrade, however, so should prove faster, and there are some clever new Air Gesture features, which allow you to do your best Yoda impression and control the phone without any physical contact with the screen - a feature for our times, if ever we heard one.

Both models get a battery boost, up to 4500mAh and 4300mAh respectively, and there’s USB-C wired and wireless charging on offer. Samsung promises more than 5

Elsewhere, there’s no headphone jack, as per the previous generation (no doubt Samsung would love you to use the new Galaxy Buds Live) but there are Dolby Atmos stereo speakers, tuned by AKG. And the phones are dust and water-resistant to the IP68 rating as before.

For gamers, Game Pass Ultimate offers instant access to a curated library of more than 100 popular Xbox games from the cloud including Minecraft Dungeons, Forza Horizon 4, and Gears of War 5: Ultimate Edition later this year.

Our brief hands-on time with the new handsets realistically gave us little to go on when it comes to a full review verdict - we look forward to reaching that soon when we’ve been able to spend more time using the new Note 20 phones.

For fans of the Note range, and those who love a big screen, long battery life and the clever S Pen functionality, you’re unlikely to be disappointed. Yes, there are areas where we might have hoped for more of an upgrade - the camera, processor - but these are flagship specs for a flagship phone. And the tweaks to the design certainly help bring that home.

The most cutting edge phone on the market? Very possibly. Even if the iPhone 12 manages to raise the bar, there isn’t another Android phone that puts the Note 20 Ultra in the shade on paper. In truth, the real challenge might be from below - and convincing consumers they still need to be spending the serious amount of money on this phone and not making do with the very capable phones that are available for half the price. And that battle is something worth getting excited about in the smartphone world.