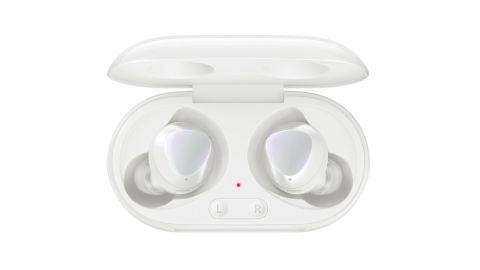 Packed with features and capable of inoffensive sound, but the Samsung Galaxy Buds+ are not the most dynamic or detailed performers

In Samsung’s ideal world, every Galaxy tablet or smartphone would probably be paired to a pair of the new Samsung Galaxy Buds+ earbuds.

The company has been here before, though. The original Galaxy Buds, launched in 2019, were true wireless earbuds, but they were also truly disappointing, with substandard sound quality and limited features putting many off – ourselves included. We deemed them worthy of only two stars.

The new Samsung Galaxy Buds Plus are once again tuned by AKG and look much improved on paper. We’re hoping they can prove more convincing.

The headphones now use a dual driver arrangement in each earpiece, one each for highs and lows. Samsung has managed to keep the earpieces small and discreet by true-wireless standards. They’re lightweight too – you can almost forget you’ve actually got them in place. The glossy smooth finish of our black sample gives the impression they’re a premium pair of buds. Blue and white finishes are also available.

There are only three sizes of eartip in the box and three sizes of wingtips, which limits your options and reduces your chances of getting a perfect seal. There’s no noise-cancelling with the Galaxy Buds+, so a good seal is needed to isolate yourself from outside chatter.

Once in place, the Galaxy Buds Plus do a good job. The surface of each earpiece is a touch-sensitive control pad, with a similar control method to that used in rivals such as the Amazon Echo Buds and the Sony WF-1000XM3s. It is implemented well here, with a single tap on either bud to play/pause with double and triple taps skipping forwards and backwards respectively. Tapping and holding your finger on one of the pads activates your voice assistant of choice, Siri or Google Assistant.

You can even double-tap the edge of the right earpiece to increase volume and the left earpiece to reduce it. It takes a subtle adjustment of where to aim your finger but it’s intuitive and you soon get the hang of it.

The Samsung Galaxy Buds+ headphones feature a new three-mic configuration for taking phone calls – one inner mic and two outer, beam-forming mics. The new configuration is designed to reduce the noise around you while making calls.

We find them perfectly clear when making conversation, although they aren’t immune to wind noise, which can affect some wireless earbuds.

The headphones come with their own portable charging case which is as tiny as the earbuds allow. It’s smaller and more pocket-friendly than that of the Sony WF-1000XM3 and Amazon Echo Buds, but not quite as small as the Apple AirPods one.

The Samsung Galaxy Buds+ claim an impressive 11 hours of playtime per charge, though there is no noise-cancelling here to drain to the battery. If your battery is running low, a three-minute charging stint should be enough to inject 60 minutes of juice. That could come in handy if you own a smartphone that is compatible with wireless PowerShare, such as the new Samsung Galaxy S20 or Galaxy S20 Ultra.

Instead of the case adding two or three extra charges, Samsung has opted to provide just one extra charge, bringing total battery life to 22 hours. By comparison, the Sony WF-1000XM3s have a claimed six hours, plus 18 from the charging case, while the Cambridge Melomania 1s have nine hours, plus 36 from the case.

The original Galaxy Buds couldn’t connect to iOS devices, which meant Samsung couldn’t persuade Apple iPhone users to dump their AirPods. This has been rectified with the Galaxy Buds+. If you’re an iPhone user (iPhone 7 or newer, using iOS10 or higher), just download the Samsung Galaxy Buds+ app. Android smartphone users will need the Galaxy Wearable app and a device using Android 5.0 or higher.

Downloading the relevant app helps you get paired quickly. Simply open the app and the case starts the pairing process. It’s relatively pain-free as the headphones actively look to pair with your smartphone or tablet once the case is opened.

The app shows the remaining power for each bud, plus the battery life left in the case. It drops from green (100 per cent) through to yellow (around 60 per cent left) to red (less than 30 per cent).

The Buds’ Ambient Sound feature amplifies the amount of external noise you’re able to hear and comes in three different levels. We keep it turned off while listening, activating with a press of the buds when required.

Like the Apple AirPods, Samsung includes a feature that allows you track down a missing bud. Enable ‘Find My Earbuds’ and they emit a noise so you can track them down quicker.

One area of the app it’s worth keeping an eye on is ‘Labs’. Here you can access ‘experimental features’ that Samsung is currently trialling. At the time of writing, these include the ability to double-tap the edge of the earbuds to turn the volume up or down. There’s also an option to add an extra level of ambient sound.

The touch controls on the Galaxy Buds Plus do a good job. They’re quick to respond and it’s not long before we are tapping the right spot every time. That glossy finish can make them quite slippery in hand, though. Getting them out of your ears and back in the case without tapping one of the earbuds and restarting your music can prove tricky.

The Galaxy Buds+ headphones offer Spotify integration. Android smartphone users can power up Spotify and start streaming with a single press on an assigned touchpad. Press again, and Spotify will switch to another track based on your listening preferences. It works well, but the feature isn’t available to iOS users.

Another feature missing from the Galaxy Buds+ headphones is the ability to pause music automatically every time you remove an earbud. There’s also no aptX HD Bluetooth support.

So how do the Samsung Galaxy Buds+ headphones actually sound? In isolation, they’re not bad, however, they aren’t a huge improvement over their predecessors.

They produce an open and expansive sound with a decent sense of scale. Bass weight is judged well, as is the overall balance. There’s a slight hint of hardness, but you couldn’t classify it as harsh or bright.

Play Foals’ Mountain At My Gates and there’s a good sense of space around the various strands of the track, even if the various elements don’t seem to gel quite as seamlessly as they could.

The problem is that, dynamically, the Samsung Galaxy Buds Plus fall rather flat. The presentation lacks enthusiasm, and that leaves you feeling rather indifferent about the sound. It’s actually a mixture of dynamic flaws, sloppy timing and a lack of detail. The headphones never really convince you they’re able to get in the groove of the track.

Play The XX’s Hold On and you should be moved by the emotive vocal exchange between Romy Madley Croft and Oliver Sim and taken on a funky, semi-trippy ride on the coattails of the lively drum beat. With the Galaxy Buds+ headphones, though, the vocals don’t connect as well as they do through rival wireless earbuds. There’s a lack of purpose and intent to low frequencies too.

Compared to similarly-priced rivals, such as the Sony WF-1000XM3s, there’s no contest. The Sonys extract more emotion, detail, and deliver a much more purposeful performance.

This feels like a missed opportunity for Samsung. The Galaxy Buds+ headphones boast useful features, excellent battery life and good build quality. They’re nice to use and comfortable to wear, too. That’s a lot of boxes ticked.

But though the feature count has improved compared to the originals, there remains plenty of room for improvement in the sound department. It’s listenable enough, but the harsh reality is there’s no shortage of better-sounding true wireless earbuds to choose from at this price point. The Galaxy Buds Plus sound better than their predecessors, but rivals have moved the game on even further.