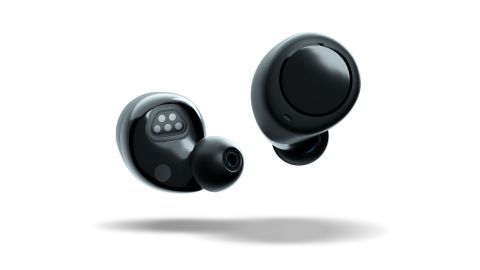 Amazon’s AirPods rivals are so flawed in their current state, it’s impossible to recommend them

Amazon isn’t usually one for following the crowd, but even this retail giant couldn’t ignore the impact of Apple's AirPods. Apple’s true wireless earbuds launched a whole new market segment and encouraged some of the biggest tech manufacturers in the business to follow their lead.

With the arrival of the Echo Buds, Amazon is now trying to muscle in on the action. It’s an understandable move – the company has had plenty of time to survey the market, while its successful range of Echo smart speakers has provided much experience of the audio landscape.

So, just how difficult could it be to build a pair of wireless buds, powered by its own smart assistant, Alexa? Quite difficult, it would appear.

Unbox the Echo Buds and your first point of contact is the carry case. It’s around the same size as a bar of soap and quite a bit bigger than the AirPods’ case. It’s black, plastic and pretty nondescript with the only hint of what’s inside being the small glossy Amazon logo on top.

Open it up and you’re greeted by the Echo Buds, which are held in place magnetically on their charging contact pads. They look a little ordinary and bulky compared to rivals such as the AirPods – love or loathe the ’toothbrush tips’, they do stand out from the crowd.

There is a small touch of design flair: a small, circular, touch-sensitive pad on each earpiece. Each one can be configured in the Amazon Alexa app to carry out various functions, from skipping tracks to activating Alexa.

In the box, there are three sets of silicone eartips and three sets of rubber ‘wings’ designed to help get the best fit possible. Putting the wings on the Echo Buds is tricky – you have to slide them over each earpiece and position them a certain way – but they’re grippy and help secure the Echo Buds in place.

Three choices of eartip seems a little restrictive, but we manage to get a good seal that is confirmed as such by the Eartip Test built into the Alexa app. We also find the Echo Buds comfortable, even when used for two to three hours at a time.

Before you start the pairing process, you’ll need to download the latest version of the Amazon Alexa app for iOS or Android. Open up the case and a flashing blue light on the front shows the headphones are searching for devices. Give it a couple of seconds and you should get a notification on your device prompting you to pair.

The app then guides you through the rest of set-up, including the Eartip Test and Passthrough. The latter allows you to hear more of the outside world while you’re listening to music, with the amount allowed in adjustable on a scale from one to five. Somewhere in the middle gives a decent balance, allowing information to come through while you’re waiting for train announcements.

The app also introduces you to one of the main features of the Amazon Echo Buds – the Bose-powered active noise-cancelling. Amazon has teamed up with Bose, which has previously had huge success with noise-cancelling headphones. The Bose logo is stamped on the packaging, while it’s also referred to as Bose ANR in the Alexa app – there’s even a dedicated button in the app for turning it on and off.

Active noise-cancelling (ANC) in buds at this price point is rare, but the Echo Buds manage to pull it off. They’re not quite as good as the more expensive Sony WF-1000XM3s, but there is a subtle improvement with the ANC turned on, compared to relying on the passive isolation from the earbuds.

Call quality is generally good for a product of this type. The Echo Buds can suffer from wind noise through the mics, but that’s not unique to these in-ears. Trying to converse with Alexa proves a mixed bag. In quiet environments, the virtual assistant responds well to our questions, but outside with background noise, we sometimes struggle to be heard.

The Alexa app also allows you to see the battery life left in the Echo Buds and their case. You should get around five hours from a single charge, which is reasonable for this level, while the case boosts that by an additional 15 hours. A quick 15-minute charge is good for around two hours of additional listening time.

You can also adjust an equaliser if you want to tune the sound, tweak the level of Passthrough, mute the mics and personalise those touch-sensitive controls.

You can either double-tap or press and hold on the pads to get the Buds to do your bidding. If you’re coming to these after using physical in-line controls and the traditional methods of single-, double- and triple-clicking, it takes a while to adjust.

And that’s one of the problems with the Echo Buds, they’re not hugely intuitive to use. Those touch-sensitive surfaces don’t help – double tapping is especially frustrating with seemingly no consistency wherever you touch them. Another issue is that you can’t change volume through the Echo Buds. You have to either ask Alexa to turn them up or down or do it via your smartphone or tablet.

But the most disappointing element of the Echo Buds is that inconsistency creeps over into the sound quality. We test the Amazon Echo Buds using an iPhone 11, and up to around two-thirds of full volume they sound extremely rich and smooth, albeit with bass that sounds quite thick and not particularly well-defined.

Play Muse’s Dead Inside and the soundstage sounds congested, like the band is playing under a duvet. Turn the volume up just one notch and their character changes completely. Immediately, they sound more open, spacious and detailed. There’s a much better overall balance. The thick cloudy bass disappears and the Echo Buds start to show a bit more sparkle across the frequency range.

But, turn them up another notch or two and the character changes again, with the Echo Buds sounding harsh, bright and far removed from their original sound.

We also experience the occasional popping noise while we’re playing with the volume. To our ears, it sounds like there’s something awry with the Echo Buds’ sound processing, so we try a replacement pair. However, we experience the same issues.

Effectively, these Echo Buds are only listenable at one specific point on their volume scale. Such a massive inconsistency leaves us wondering what actually is the true Echo Buds sound – hard and bright, overly rich or evenly balanced?

When the Amazon Echo Buds were unveiled, we were excited to see what Amazon could bring to the wireless earbud market. Could the retail and tech giant give Apple a run for its money?

Which is why we’re so disappointed. With the Echo Buds, it feels like there’s a half-decent pair of true wireless earbuds in there somewhere, but they’re held back by a hit and miss user experience and similarly frustrating (and perplexing) listening experience.

In their current state, we simply can’t recommend anyone go and buy them. To be suffering from such big sonic issues is disappointing. The only thing that could possibly bring the Amazon Echo Buds back from the brink is a firmware update that addresses the sound and volume issues. We’re just hoping Amazon (and Alexa) is listening.