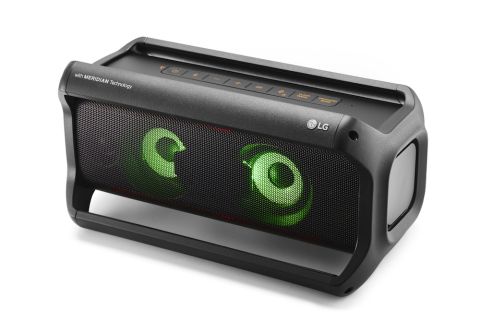 The LG PK7 ticks many boxes at this price, and is well worth an audition

An impressively industrial-looking piece of kit, LG’s PK7 is right in the sweet spot for the wireless speaker market.

With a rechargeable battery, good for a claimed 22 hours’ use at 50 per cent volume, apt-X Bluetooth capabilities, and a rugged, splash-proof body, it should certainly tick the boxes as far as practicalities go for outdoors listening, be it a barbecue in the garden or a camping trip.

The first word that springs to mind when we look at the PK7 is ‘industrial’. It’s made from hard, textured plastic with the grab handle on the top mirrored by one below, upon which the unit rests. Any furniture is protected from the hard plastic by four little rubbery feet.

It’s a solid unit, which seems in keeping with the intended versatility of a speaker that may spend plenty of time outside. To complement this look and build, the PK7 is water resistant to IPX5 standard, which means it should be fine if splashed with water.

The feature list is fairly standard for a wireless speaker – Bluetooth apt-X HD and a 3.5mm aux-in socket are the methods for channeling your tunes – but there are a couple of extras that, LG hopes, will make the PK7 stand out from the crowd.

The first is announced proudly on the heavy duty plastic grab handle. LG has teamed up with Meridian Audio (more known for its range of high-end hi-fi) in an attempt to get the best possible sound from the PK7’s two midrange drivers, two tweeters and two side-mounted passive radiators (which should boost the bass output of the unit).

And the Meridian name is prominent (it’s a great association for LG, after all). So, to go along with the ‘standard’ sound of the PK7, you can choose to employ one or both of Meridian’s tuning options: ‘Clear vocal’ or ‘Enhanced bass’. These are important enough in LG’s eyes to merit a button apiece in the row of eight push-pads along the top of the PK7.

The other extra is a little less conventional. LG has tried to inject some fun to the PK7’s proceedings. Push one of the buttons on the top of the unit, and you can access the ‘Beat Lighting’ feature. This starts the unit flashing with pulses of light in time with the beat – ‘just like the hottest dance club’ according to LG. You can choose between ‘Water’ (blues), ‘Forest’ (yellows) and ‘Party’ (rainbow colours). Or, of course, there’s “Off”.

While the Beat Lighting is quite fun at first, it often feels that the flashing of the multi-coloured lights is just a touch behind the beat, which ends up being distracting. The lit-up midrange drivers only go to highlight the impression of the PK7 as a decapitated Wall-E staring at us with baleful reproach, even as he goes through the motions of being the life and soul of the party. So, for us, “Off” it is.

Further features include the ability to pair two of the units to run your tunes in either stereo or boosted mono, to really get the party going. And the PK7 has the ability to take and receive calls from your smartphone, communicate with your device using voice command, and use LG’s proprietary Music Flow app (Android devices only).

The PK7 undoubtedly gives out a bigger sound than might be suggested from its size. And it certainly isn’t lacking in power, being quite able to flood our medium-sized listening room with music. It’s a nice easy listen, with those passive radiators able to promote some decent bass reproduction, and a fairly wide spread of sound.

The treble does lean towards a touch of coarseness, but it’s by no means a deal-breaker – and for a £130 speaker, which this now seems to be (it was originally priced at £200), the overall sound produced is good. That slight stridency in the upper midrange, though, means the sound isn’t the most refined. But, for a machine that has clearly been designed for going out and about, that shouldn’t be an issue. If you’re out on a picnic, or working out at the gym, it simply won’t be an issue.

We’re not totally sold on the two tuning options – the Enhanced Bass, in particular. Push the button to turn that on and the effect is immediate. What was a reasonably tight lower register becomes more of a smeary melange, so that notes run into one another, and it becomes difficult to disentangle the individual string plucks. We would leave that option well alone.

Clear Vocal, on the other hand, certainly has its place. Once again, the effect is pretty obvious, with the midrange pulled out to the front of the mix. With the right track, this can be a useful tweak to a tune – but that area of the sonic spectrum is also where the slight treble stridency can kick in, so you will need to be judicious. But don’t discount it – it’s worth experimenting with different tracks to find your preference.

We’re quite impressed with the LG PK7. For a not unreasonable (now) £130, you’d be hard pressed to better it in most areas. It’s not perfect, but its shortcomings are forgivable. If you’re after a rugged unit with (ahem...) film-star looks, that you can take outside without concern, this may well tick your box. Worth an audition.