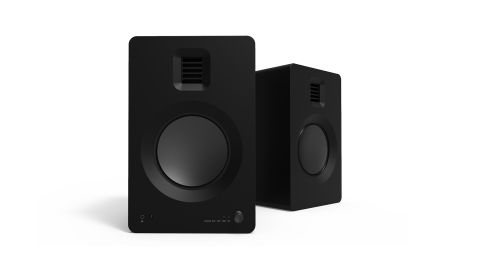 All the right ingredients are here, but the sonic balance needs work if Kanto is to join the class-leading competition

The TUK speakers take their name from Tuktoyaktuk, a remote hamlet in the Arctic Circle, where the Aurora Borealis, or Northern Lights, can often be seen. Kanto claims to have emulated this thrilling visual experience in sound with its latest offering.

These powered speakers carry many of the features you'd expect of a complete music system, including aptX HD Bluetooth and both digital and analogue inputs. There's even a moving magnet phono stage. In short, you can connect a range of kit, including your phone, tablet, TV and turntable.

There’s also a headphone jack and a dedicated Sub Out RCA connector for integration with a separate subwoofer – Kanto recommends the Kanto sub6 or sub8 – but this isn’t essential. There’s a SUB button on the supplied remote for muting the sub output plus an 80Hz crossover filter that, when activated, sends bass frequencies to a connected subwoofer and lets the TUK focus on the midrange and treble.

All of this is good news in terms of integration options, but we’re testing the speakers in their own right, and we begin by holding the forward track-skip button on the remote to tell the software that the master speaker is on the right (by default it's set to handle left-channel duties), as that better suits our system arrangement. The blue LED panel on the master speaker moves through the input options to indicate that the desired set-up has been achieved.

The 28x35mm AMT (Air Motion Transformer) tweeter and minimalist, 13cm aluminium woofer give the speakers a clean look, even though it's a little plastic-heavy. The white finish of our model (also available in matte black) is highly likeable.

There is a bass reflex port on the back of each speaker and, while Kanto says the ideal placement is at least 20cm from a rear wall, we find that placing them around 15cm away from the wall of our listening room shows them at their best.

Power is claimed to be 65W per channel. And remember, these are powered speakers, not true active, so the amplification is all housed in the master speaker enclosure, with a cable link between it and its passive partner.

Where an active system features a dedicated amp for each driver, the Kanto approach should be thought of as more akin to a traditional, passive system, where the amp (in this case a Class D design) is simply squirrelled away inside one of the boxes.

A further cable from the master speaker into a power socket completes the fuss-free set-up. Kanto has supplied a USB connector for a computer, but we initially press the TUK’s volume knob to scroll through input options to Bluetooth, pairing easily with our iPad to run the speakers in.

Kicking our listening off with Bluetooth, we cue up Tidal’s Retroactive playlist on our iPad and find the youthful choir at the outset of The Rolling Stones’ You Can’t Always Get What You Want clear, tonally convincing, spacious and with a healthy dollop of detail. As the guitar and solo horn pipe up through the left speaker, Mick Jagger’s voice joins us with a pleasing central placement.

We become aware of the TUK’s energetic ability when it comes to delivering a dynamic performance through the midrange frequencies, too. Jagger’s vocal is upfront but held within a nicely layered mix, from the sparkling treble to the competent mids.

We play Space Oddity and David Bowie’s stirring, sombre lyrics resonate with texture in a refreshing, engaging presentation as the distant countdown to lift-off begins. It’s easy to pick out the more meandering musical passages alongside the raucous percussion, too, with each strand given space to shine.

The weeping electric guitar at the start of Whitesnake’s Now You’re Gone is delivered with both zeal and ease through the finessed high frequencies. When the drums kick in, the TUKs are more than up for the task of keeping the timing secure – but the bass clout is lacking. Checking that all EQ settings are at neutral and that the active crossover (which could send those frequencies to a subwoofer) is disabled, we realise that it is a genuine issue.

While the TUKs are presenting a clean and agile listen, it’s also thin and overly forward – and even adjusting the EQ settings and moving them closer to the rear wall of our listening room doesn’t fully balance things out.

We hook up our laptop with the supplied cable and select Hans Zimmer’s Main Theme from The Dark Knight Rises – a FLAC file from the hi-res music on our server. Strings are agile, identifiable in their groupings and feel altogether part of a human orchestra. However, the overall balance isn’t quite right; the bass registers are reticent and not nearly as stirring as they should be while the midrange lacks projection and solidity.

We locate Joni Mitchell’s River, another FLAC file, but this time we listen through Grado’s SR125 headphones plugged into the master speaker. It’s an expansive mix where Mitchell’s vocal seems as close to our ear as she intended, but we’re missing her vocal strength through the lower registers.

For those hankering after a set of plug-and-play powered speakers offering connections to any external source your heart desires, the Kanto TUK speakers present a fully-featured and well-made proposition.

All the right ingredients are there, but the sonic balance needs work. The bass is thin compared to the rest of the mix, and listening actually becomes wearing over time.

The Kanto TUK speakers certainly look the part, and they offer a banquet of options for setting-up. And while we’re sure that seeing the Northern Lights is a five-star experience, the TUKs cannot replicate that with a thrilling, five-star listen.