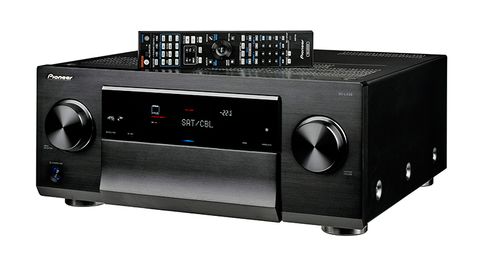 Pablo Picasso’s Nude, Green Leaves and Bust sold for a record $106.5m at auction in New York, Spain won their first FIFA World Cup and the Pioneer VSX-LX53 was named best AV receiver priced between £1000 and £1500 at the What Hi-Fi? Awards. That was in 2010.

Half a decade on, and Pioneer is seeking to retain its crown for the fifth year. Each subsequent champion from this range of AV receivers has been a new model – no repeat winners, just more and more impressive examples – and Pioneer is hoping that that admirably consistent chain of improvements will continue with the SC-LX59.

Set-up remains a doddle, and after checking we have the right outputs (which still aren’t properly marked) for our Atmos speakers, Pioneer’s long-winded but thorough and accurate set-up system MCACC Pro does the rest.

If you have previously used any recent Pioneer AV receiver, little has changed in terms of aesthetic or functionality, it’s smart and pleasantly user-friendly.

We play the Blu-ray of Epic to begin. As the queen is chased through the forest by an army of boggans (if you haven’t seen the film, you must) we are belted with the excitement of the soundtrack.

There’s plenty of nuanced attack, expressing well the differences between the peril and slapstick humour both present within the scene, and an impressive level of organisation keeping the soundscape busy without becoming cluttered.

There’s great enthusiasm here, rendered with a healthy amount of power, but the SC-LX59 doesn’t compromise when it comes to conveying the subtlety in the characters’ voices.

The scope of the humour, anger, panic and sadness is so impressive that we have to remind ourselves that this is a sub-£1500 receiver. It’s a performance that many products twice as expensive would struggle to deliver.

That insight is reflected when using the SX-LX59 to play the Blu-ray audio disc of Johannes Brahms’s Ein deutsches Requiem, as played by the Warsaw Philharmonic Orchestra and Choir.

There is plenty of space and decent girth to the sound, but it is the mournfulness that impresses. You shouldn’t compare this with a stereo amplifier at the same price, but there is a musicality here that would be difficult to replicate in any similarly priced rival.

The instruments and voices are organised so that, while in unison, they separate enough to interact and intertwine. The same sympathetic dynamics that helped carry the expression of the voices in Epic are doing the same with Brahms.

Though other elements differ, such as detail and space, that level of expression doesn’t appear to suffer when playing a standard CD or through an iPod, or with different genres of music.

Was there any doubt that Pioneer could improve upon its predecessor, the SC-LX58? A couple of hours spent in the company of the SC-LX59 will banish those thoughts altogether.

Once again, Pioneer has designed a stunning A/V receiver without compromise. Even better, it has done it without upping the price. This is one of the soundest investments you could make in a burgeoning home cinema system.

See all our Pioneer news and reviews