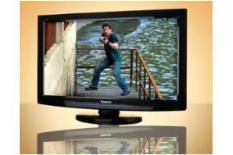 In isolation, the TX-L32S20 does little wrong. But against key rivals it comes up fractionally short

We've quite recently looked at a representative of Panasonic's ‘S20' range, but as that was a) a plasma screen and b) 50 inches across, we're making no assumptions about this 32-inch LCD's chances – though we're pleased to see the textured ‘safety-floor' finish of the big plasma is retained for this little sibling.

£600 spent elsewhere might (can, in fact) buy you the networking ability and the LED backlighting (and consequently wafer-thin profile) the Panasonic eschews, but in all other respects the TX-L32S20 is right on the money.

That relatively chunky frame is nicely finished, the remote control's big-print and comprehensive, and the on-screen menus are slick and logical.

Winning ways
There's an enjoyable vibrancy to the pictures the TX-L32S20's tuner produces, and a winning way with both stark contrasts and rapid motion.

Standard-definition broadcasts, particularly, are a little coarser and edgier than we'd like but a switch to Freeview HD calms the worst of the picture noise and dot-crawl. The high-definition tuner isn't too tolerant of marginal signal strength, though.

Black levels improve too, and the 'S20 draws edges with a far steadier hand.

Better with Blu-ray
Unsurprisingly, it's with a Blu-ray (of Invictus) that the S20 makes the strongest case for itself. The previously diffident detail levels become jam-packed here, and the overall picture is straight-edged and assured.

The colour balance is subtle and natural, movement is described with complete authority, and the crisp contrasts and pitiless suppression of picture noise make for a credible and absorbing overall experience.

Only black shades, which could still be deeper, mar the high-def whole.

Well, that and that sound the screen makes, of course. We're not about to single out Panasonic for opprobrium, of course, but it's typically reedy.

Despite some areas of genuine expertise, the Panasonic TX-L32S20 can't quite do enough to merit the full five stars – so a decent showing at four stars it will be.