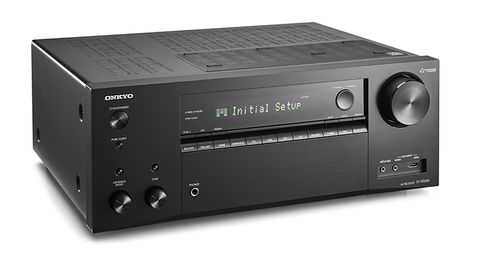 While it doesn’t lift us out of our seat as the class leaders do, the Onkyo TX-NR686 remains an enjoyably listenable proposition

The world needs more really nice people – the sort in the circle of friends who always buys a round, and always listens to your problems despite you never paying attention to theirs.

The Onkyo TX-NR686 is one of those types of people. It might not be Best Man at your wedding, but it would dutifully make sure your gran wasn’t left sitting alone at the evening do.

Though really competing with home cinema amplifiers costing around £500, this Onkyo feels (in many ways) worthy of its marginally loftier price tag - and it definitely hasn’t shirked its responsibility when it comes to features.

As well as its 7.2 regular channels – the last two of which can be defined either as surround back or as height speakers in a Dolby Atmos or DTS:X set-up – the TX-NR686 has further amplified channels for another pair of speakers in a second zone. And given that it's rated at 165 watts per channel, getting meaningful volume from even quite demanding speakers shouldn't be a problem.

That goes beyond most of its rivals and, given its 32bit/384kHz inbuilt DAC, could deliver a handy cost saving should you fancy a stereo set-up in another room.

Physical inputs are numerous as well: seven HDCP 2.2-enabled HDMI sockets (one of which is stationed below the volume dial on the front), two optical and one coaxial digital inputs, a powered USB socket, six analogue connections (including a 3.5mm jack on the fascia) and a moving-magnet phono input for partnering with your turntable.

There's not one but two subwoofer pre-outs, so you can easily alienate your neighbours should you so desire.

In terms of the unseen, the TX-NR686 has Chromecast with Google Assistant, DTS Play-Fi and FlareConnect systems built in for potential multi-room use, plus Bluetooth and Apple AirPlay for your now as-standard wireless file sharing.

Once you have connected the amp to your wi-fi network, you’ll have access to the major streaming services, such as Spotify, Tidal, Amazon Music and Deezer.

MORE: DTS Play-Fi - everything you need to know

Onkyo is proud of the TX-NR686’s THX Certified Select status and, though of course any amp needs at least a good period of running in before it reaches its potential, this receiver’s likeability is evident from the moment we plug in our speakers and fire up a 4K UHD Blu-ray copy of Mad Max: Fury Road.

In essence, everything this Onkyo does, it does pretty well.

It begins with a lusciously expansive and full-bodied soundstage that leaves no corner of our test room empty of sound. It delivers a well-balanced frequency range, not rolled off or exaggerated at either end, and brilliantly avoiding any brightness or hard edges.

There’s plenty of detail in there as well - perhaps it isn’t as fully textured or granular as via the Sony STR-DN1080 (our current home cinema amplifier Product of the Year) but there’s insight enough to sufficiently hold our attention.

Timing is good, too, even down in the lower frequencies where the TX-NR686 is more than willing to show its power.

Often a multi-channel amp's facility with timing is spotlit most when playing music, and given Onkyo’s enthusiasm for this being a dual-purpose amplifier its timing talent is of added importance. So it's pleasing to note Boards of Canada's seismic Aquarius is handled without alarms.

Our main issue is that this Onkyo plays it a little too safe. It’s all a little too polite, too nice. While overall its presentation is an easy, pleasurable listen, it lacks the punch and dynamic range to really draw us into what we’re watching.

MORE: 4K Ultra HD Blu-ray - all the discs on sale and coming soon

Compared with this market’s class leaders - the aforementioned Sony and Denon’s most recent five-star amp (the AVR-X2500H) - it lags noticeably behind both for punch, and trails the Sony in particular for that dynamic variance and musical detail.

If you do go for the Onkyo, take care with system matching. You won’t be able to inject any of what it lacks, but you could double down on it with an equally safe-sounding speaker package. Best to let this amp feed a livelier package, such as the Dali Zensor 1 5.1, and make the most of what enthusiasm it has.

It isn’t that we would strongly recommend steering clear of the TX-NR686. It has more than just its extensive feature list going for it, and it's easy to listen to all day long. But there are better all-round performances out there for the money.

Mind you, if ‘nice’ is what you’re looking for in your home cinema set-up, you can’t really go far wrong with the TX-NR686.