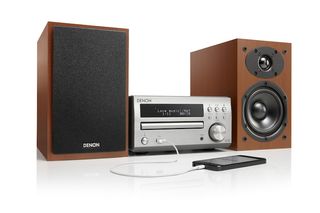 It almost feels like it wouldn't be an Awards night without a Denon micro system on the roster and sure enough the latest model in the Denon system dynasty, the D-M40DAB, took home the 2016 Award for best micro system.

It's the second year in a row for this incarnation and more than we care to remember for the various versions we've seen over the years.

Enough tweaks and feature upgrades have ensured that Denon has stayed ahead of the pack, with the M40 getting upgraded electronics and speakers, while also undergoing cosmetic fine tuning.

That's why if you want a simple box-and-speakers system for CDs, the radio and more, look no further than the Denon D-M40DAB, our Product of the Year in this category.

Need something more compact? There's a lot to be said for a one-box system with integrated speakers and the Revo SuperSystem is an excellent example of exactly that. It's not cheap but then nor is the level of performance on offer.

There are a whole host of options for playing music, from the built-in FM, DAB and internet radio, to the analogue and digital connections, to the ability to stream music over Bluetooth or wi-fi. It also has Spotify integrated to make music streaming even easier.

It looks the part, sounds the part and is easy to use thanks to its companion app. If you want a premium system for the bedroom, kitchen or even your front room, the Revo SuperSystem is a winning option.

Completing our trio of Award-winning systems is the new Solo Music from Arcam. One of the original 'hi-fi' one-box systems, the latest version of the company's multi-talented box simply requires the addition of speakers to give you a whole world of music options.

As well as being a CD/SACD-playing, network-streaming source, and having a DAB/DAB+/FM tuner onboard, the Solo has a cluster of digital and analogue connections, including four HDMI inputs, and single optical, coaxial, USB, phono and 3.5mm inputs. It can do Bluetooth and DLNA, too.

So it's not just a hi-fi system, you can also run all manner of other devices through it, whether that be your TV, games console or Blu-ray player.

Just add a solid pair of speakers and you're treated to a powerful, detailed sound from the stylish unit. That's why the Arcam Solo Music is our best hi-fi system for 2016.