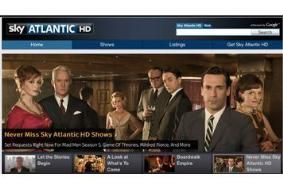 Feb 1st: Let The Stories Begin airs at 8pm. Followed by first episode of Boardwalk Empire, Martin Scorsese and Terence Winter's Prohibition drama, starring Steve Buscemi and Kelly Macdonald, plus Blue Bloods in which Tom Selleck stars as a NYC police commissioner in drama about a multi-generational clan of cops

Fans of Award-winning Mad Men, wrestled from the BBC by Sky, will be able to see series five on Sky Atlantic in August, along with a new UK series from Paul Abbott, Hit and Miss, about a pre-op transsexual contract killer.

Full details of Sky Atlantic's programming schedule are on the channel's website.

Sky is making a number of changes to its EPG (electronic programme guide) which it says mark "one of the biggest updates to its channel line-up for more than a decade".

The upgrades include: a high definition 'channel swap' for Sky+ HD subscribers; the relocation of a range of leading pay TV channels on the EPG; and the launch of another HD channel, Sky Atlantic.

Taking effect from February 1st 2011, the improvements are designed to make it easier for Sky customers to find the TV shows they want. They are:

• For Sky+ HD subscribers, 40 channels in Sky's HD pack will swap positions in the EPG with their standard definition counterparts. For example, they'll find Sky 1 HD at channel 106, with Sky 1 SD moving to channel 170. Customers not subscribing to Sky+ HD will not be affected by the change.

• Sky Atlantic launches: it's a new channel devoted to 'hot' shows including the best of HBO, cult shows such as Mad Men and original UK commissions such as Paul Abbott's Hit and Miss, all on channel 108.

• Living will rebrand as Sky Living and will move to channel 107, to sit between Sky 1 and Sky Atlantic.