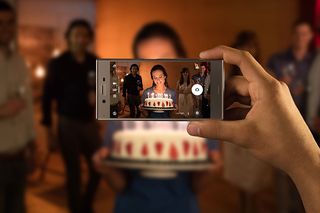 Sony has always wanted to flaunt its smartphone camera technology and it continues the trend with its two new X-series releases. Sony has taken the Exmor RS sensor, already used in its smartphones, and added two assisting sensors to create what it's calling triple image sensing technology.

The Exmor RS sensor has a Predictive Hybrid Autofocus feature which claims to predict and track objects in motion for “blur-free results”. The other two sensors are a laser autofocus for helping out in low-light conditions and an RGBC-iR sensor with colour-sensing technology to “accurately adjust the white balance based on light source”.

Sony says the combination of the three sensors will allow you to “capture beautiful images in motion with true to life colours in virtually any conditions”.

Sony is keen to get you snapping pictures quickly and easily too, and claims it takes just 0.6 seconds from standby to camera mode using the shutter button. Once you’re in camera mode, there’s a host of manual settings for budding photographers to adjust to “further enhance the shooting experience”.

Video hasn’t been forgotten either - the Xperia XZ and Xperia X Compact have been fitted with Sony’s latest image stabilisation technology, derived from the company’s Handycam camcorder range. The two smartphones have five-axis stabilisation to help compensate for juddering when filming while walking or taking close-up shots.

The Xperia XZ has a 13-megapixel camera on the front, for taking those all-important selfies. It has an ISO6400 sensitivity rating and 22mm/90-degree wide angle lens so you can take better photos in low-light.

The Xperia XZ has a 5.2in Full HD glass screen and metal back, while the Xperia X Compact has a 4.6in display and high-gloss rear finish. Sony is, then, sticking to Full HD screens for both new handsets, rather than make the leap to 2K or 4K, claiming this helps to improve battery life.

The handsets are available in new blue finishes: Forest Blue for the XZ and Mist Blue for the X Compact. The XZ gets the added benefit of water-resistance and both come sporting a fingerprint sensor, placed on the side of the phone where the user's finger tends to rest.

Both phones also feature Battery Care and Qnovo adaptive charging which are claimed to work together to greatly extend the battery's overall lifespan.

Qnovo adaptive charging is claimed to adjust the charging current to avoid damage, while Battery Care controls charging “based on learned habits” and can pause charging at 90 per cent before completing it “just before it’s needed”. Charging is now done via a USB Type-C cable as opposed to microUSB.

The Sony Xperia XZ will be available from October while the X Compact launch in September, pricing has yet to be confirmed for both models.