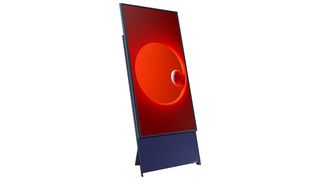 It looks like we lost the fight to make people take horizontal instead of portrait videos with their phones - and now the vertical video craze could be spreading to TVs.

Samsung is showing off various lifestyle TV concepts at a pop-up store in Seoul, and the most interesting of the new ideas, is the Sero, a vertical TV.

The TV is based on the increasingly standard smartphone app orientation, as made popular by Instagram and Snapchat, and it can synchronise with your phone to mirror the screen. Cleverly, if the content changes from portrait to landscape, the TV screen will rotate horizontally to the conventional TV form.

Not just a pretty face, the Sero TV is also be a Bixby-powered, voice-controlled smart display.

Committed to providing a complete audiovisual experience, the Samsung Sero TV comes equipped with a 4.1-channel, 60-watt high-end speaker, which can play music streamed from your phone, tablet or laptop.

Samsung's pop-up showcase is all about 'enjoying the screen in a new way', with the hope that these TVs reflect the phone-addicted lifestyle of, well, most of us. The Sero is being shown alongside other, previously announced high-end concept TVs, the Frame and the Serif.

The Samsung vertical TV will be released in Korea at the end of May, with an unsurprisingly steep price tag of 18.9 million won (roughly £12,500). That sounds decidedly out of reach for the average millennial. Still, one can dream, and with TV tech inevitably dropping in price over time, could this be the start of things to come?

Sonos deal: Save up to 25% on the excellent Sonos One