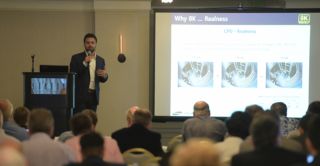 The proliferation of 4K UHD TVs has been a little slower than manufacturers anticpated, but nevertheless 99 per cent of 60in-and-above TVs sold last year were 4K UHD. Now Samsung is gearing up to go to the next level: 8K.

Samsung hosted its second annual QLED & Advanced Displays summit in Los Angeles at the end of June, and high on the list of topics for discussion was the company's plans for a full 8K ecosystem.

Samsung showed an 8K TV at CES at the start of 2018, and a month later it tested 8K broadcasting with Korean satellite company KT Skylife. And now the word (according to ZDNet) is the company is forging an industry-wide '8K alliance' with manufacturers, content producers and distributors.

Speaking at last month's summit, David Jung (senior engineer at Samsung Visual Display) said "8K requires more cooperation and dialogue between industry players... we must cooperate with all stakeholders in the ecosystem, including content makers and distributors".

And in a masterclass of understatement, Jung added "we feel we have to sufficiently explain to industry players in the ecosystem, and most importantly the consumers, the value proposition of 8K".

Whether or not an industry body is able to sell the benefits of 8K to a wary public remains to be seen. But Samsung is determind to advance the argument - there are rumours of two 8K ranges launching fairly soon.

According to Forbes, a premium (120kHz) range will be ready to go almost as soon as IFA 2018 in Berlin finishes, with a slightly more mass-market range slated for early 2019.

Yes! You can watch the World Cup in 8K

The 8K state of play, accordig to LG, Samsung, Sony and more