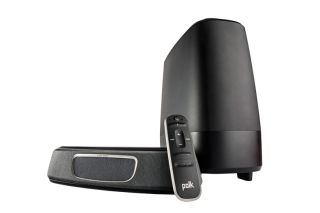 They say that good things come in small packages. Polk Audio is trying to prove that with two new compact soundbars: the MagniFi Mini and Signa S1. Both promise to outperform their bigger rivals.

How? It's all thanks to Polk's SDA speaker technology, 5.1 Dolby Digital and DTS decoding, as well as Polk's patented Voice Adjust technology. This last one improves vocal clarity, so dialogue should be clearer, even from the most gruff-voiced actors.

It too has 5.1 Dolby Digital decoding and Polk's Voice Adjust tech. It also has some handy preset EQ modes, like 'Movies', 'Music' and 'Night'. Select one, and the soundbar will tailor the settings to fit the mood.

Like the MagniFi Mini, it comes with a wireless subwoofer to add some rumble to proceedings. Both the Mini and S1 also double as wireless speakers, taking tunes from any device equipped with Bluetooth or Google Home.

As yet, there's no word on when either soundbar will go on sale in the UK.