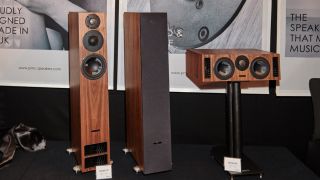 PMC has launched an improved speaker family based on its award-winning Twenty5 series range at the Bristol Hi-Fi Show.

The six-strong PMC Twenty5i series — the 'i' is for 'improved' — features two sets of two-way standmount speakers and two two-way floorstanders alongside the three-way Twenty5.26i floorstanders and the Twenty5Ci centre channel too.

The core changes from the 2016 Twenty5 series are a new tweeter, a re-engineered crossover, different finishes and a brushed rather than polished back panel. The aim for PMC was to create a more open and expressive sound.

To achieve that, the redesigned high-frequency drive unit is one that’s derived from PMC’s premium Fact speaker range. It’s a 19mm soft dome tweeter with a 34mm outer surround to keep a wide dispersion while also working down to lower frequencies.

The military-grade, fibre-glass board-mounted crossovers have been entirely revamped. The crossover point has been lowered from 1.8kHz down to 1.7kHz in the two-way models, with a mind to making the response across the drive units even more joined up. It also gives space for the low frequency units to focus more on their core responsibilities.

The two floorstanding models have also had improvements to their plinths. Whereas before they plinths were fixed firm to the cabinets, the attachments are now shock absorbing for better vibration management. PMC says it makes for vast improvements in the control of unwanted resonance. There are no changes to the cabinet sizes or materials themselves.

The range hits UK shelves in March 2020 and is available in a choice of Oak, Walnut and Silk White finishes. A high polish Diamond Black will cost a few hundred more per pair.