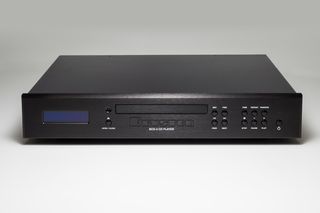 The Bryston BCD-3, a CD player aimed at audiophiles, was announced just before Christmas, but has now been launched in the UK, courtesy of Bryston distributor PMC.

Each DAC is synchronised to the transport using a single master clock - this is Bryston's own way of eliminating jitter, ensuring smooth playback.

You can choose to use either the balanced XLR or unbalanced RCA stereo outputs as well as transformer-coupled SPDIF/AES digital outputs. It can be hooked up to the internet, and receive firmware updates via an ethernet cable.

The front panel comes in black or silver, and is designed to match Bryston's Cubed Series amplifiers.

The BCD-3 goes on sale in February, priced £3,700. But that's a small price to pay if you're serious about your CD collection.