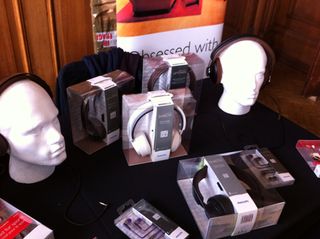 Spotted at yesterday's CU technology showcase was this range of new Philips CitiScape headphones, due on sale in the UK next month.

Their designs were inspired by people living in six of the most vibrant cities in the world, says Philips: New York, London, Berlin, Shanghai, Paris and Tokyo.

Clearrly targeted at urbanites, the CitiScape Collection consists of three headband and one in-ear model: Uptown (£90), Downtown (£60), Shibuya (£45) and the in-ear St Germain (£45).

All use MusicSeal, a double-layer wall inside the ear shell that seals the edge between the cushion and housing, helping remove background noise and minimise sound leakage.

You can also easily answer phone calls on your mobile using the built-in microphone, and all the headphones come with a 1.2m flat anti-tangle cable.

The Uptown, Downtown and Shibuya models have 4cm drivers, while the in-ear St Germain gets smaller 1cm drivers.

Finishes range from the black/brown or brown/light grey options on the Uptown to the brown, light grey and purple of the Downtown, both inspired by New York street style. The Tokyo-inspired Shibuya comes in brown, blue, pink, purple or white, while the Paris-influenced St Germainis available in brown or purple.

Also new from Philips is the Fidelio F1 headphone (£230) which will be reviewed in the May issue of What Hi-Fi? Sound and Vision, on sale from April 5th.