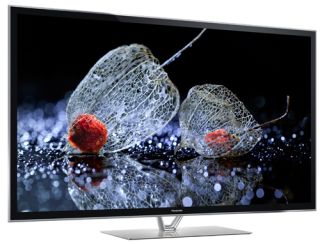 UPDATE: Panasonic originally announced the flagship plasma TV as the TC-P60ZT60 but it has now been confirmed that the UK model will be the TC-P60ZT65.

If you're in the market for a top-of-the-range Panasonic plasma in 2013, then it looks like you'll have to make space – and save the cash – for a 60in model.

The company's flagship ZT65 plasma TV has been confirmed for the UK as a 'limited edition' 60in model, with the 65in size shown at CES not set to come to Europe.

Panasonic says the ZT65, which uses a completely new panel to the rest of the company's 2013 range, will be available in limited numbers.

The company wouldn't put a figure on how many TVs would be available, and stressed there would be a good number of screens, but suggested it simply wasn't viable to offer in huge volume or in two screen sizes.

The Panasonic TX-P60ZT65 is due for release in May and will sell for around £4000, promising 'Beyond the Reference' picture quality thanks to a whole new Studio Master panel, 3000Hz Focused Field Drive and 30720 gradation steps of colour.

A full HD 1080p, active 3D TV (all the companies plasma TVs are active, while the LED sets all use passive 3D technology), the ZT65 will come with two pairs of 3D glasses.

There's a new look customisable My Home screen, redesigned Viera Connect apps page, Swipe and Share 2.0 for sharing content from a tablet or phone, and a new Viera Remote 2.0 app for iOS and Android.

There's also the Touch Pen bundled free with the TV, should you want to draw all over your plasma. The Touch Pen comes with the ST plasma models and above. It's not compatible with LED sets).

Also inside are a whopping four tuners – as elsewhere in the Panasonic range – giving you twin Freeview HD and two Freesat HD tuners, allowing you to watch one and record another on either platform.