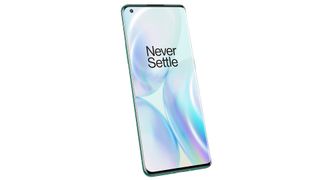 OnePlus is no stranger to leaks, but this is a whopper. The smartphone brand might have just accidentally revealed an image of its upcoming flagship phone, the OnePlus 8T.

The first peek of the One Plus 8T comes courtesy of an image that snuck into the latest OnePlus Android 11/R developer preview. The leak, posted on OxygenUpdater, shows a front-facing image of what appears to be the OnePlus 8T.

OnePlus has yet to confirm the leak is legit so the image could be a mock-up or a placeholder.

That said, as OnePlus typically updates its smartphone line-up in October or November, the 8T – successors to the One Plus 8 and OnePlus 7T – is due to be released soon. It's also worth remembering that the leaked image is contained within the firm's own firmware update, too, which speaks volumes.

So, when will OnePlus fans be able to get their hands on the 8T and how much will it cost? So far, OnePlus hasn't revealed any official information, however according to the latest OnePlus 8T rumours "the 8 and 8 Pro launched [on schedule] in April, which means their successors should land around October."

Prefer Apple to Android? There's plenty of juicy news and rumours about the forthcoming iPhone 12 here, too.