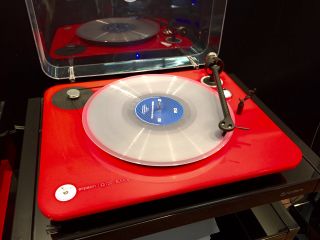 French manufacturer Elipson is showing a range of new turntables on its ISE 2016 stand.

Designed, developed and manufactured in France, the new Alpha and Omega series of turntables all feature automatic speed control (33.3 and 45rpm), bespoke tonearms and motors.

The most expensive (at what's expected to be around £500) and also the most fully loaded is the Omega 100 RIAA BT. It's built from a combination of PMMA, pressed steel and acrylic lacquer, and it's fitted with an Ortofon OM10 cartridge. The 'RIAA' refers to the phono pre-amplifier that's fitted, while BT indicates Bluetooth and its universal wireless streaming capability.

At the entry level, the Alpha 100 starts at £200 - which buys you an MDF/pressed steel construction and a more-than adequate Ortofon OM5 cartridge fitted. Spend another £50 and you can upgrade to the Ortofon OM10.

The Alpha and Omega ranges are expected to go on sale in the UK from next month, and will be present at the Bristol Sound & Vision Show (February 26th-28th) for your closer inspection.