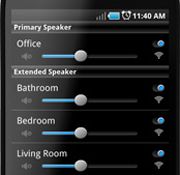 Developed by California-based DTS subsidiary Phorus, which will launch its first products in the States on October 1st, the technology can also be applied to iOS devices and Windows smartphones and tablets – but the company says it's concentrating on Android for now, simply because there are so many devices already in use.

The first products to be launched will be a $199 standalone speaker system (top) and a $149 transmitter/receiver (above) designed to connect into existing hi-fi and home cinema systems, which will work in conjunction with an Android app downloadable from the Google and Amazon stores.

The system will allow the streaming of MP3 and FLAC files in their native form to multiple speakers using Wi-Fi 802.11b/g/n. In addition the Android devices will be able to access music stored on DLNA-compliant computers or network-attached storage units on the home network, and redirect the music to the Play-Fi receiver.

Upgrades are planned to extend the streaming capability to AAC and Ogg Vorbis files, as well as internet streaming music services.

Play-Fi can support up to 16 playback devices on a single network, with eight usable simultaneously, and up to four Android sources can stream over a single network at the same time.

Up to four speaker/receivers on a network can be used to play the same Android source. That gives the new system a significant advantage over Apple's AirPlay which – in its iOS version at least – can only play from a single device to one receiver at a time (although AirPlay enabled computers can play to multiple 'speakers' simultaneously).

Connecting a Play-Fi receiver to a home network takes less than a minute, the company says.

And it also claims to have overcome the usual Wi-Fi streaming problems of stuttering and breaks in transmission by prioritising Play-Fi traffic on the network, and synchronising devices to give a latency of less than 7ms.

The Play-Fi app, which will run on Android 2.2 and above, and also on the Kindle Fire and Fire HD, will also control remote speaker levels and allow the user to choose which speakers receive the music.