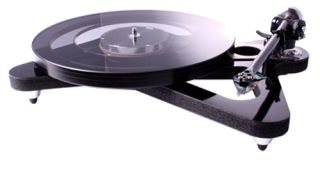 There are plenty of vinyl fans here at the show, and desirable turntables to whet their appetities. None more so than the new RP8 from Rega, with its radical plinth design and three-piece laminated glass platter.

Features include a new plinth using a polyolefin foam core which makes it seven times lighter than the original Planar 3 plinth, a new tonearm bearing assembly, a 24v low-voltage motor controlled by a hand-tuned electronic power supply, and a custom version of the Planar 9 hub bearing assembly.

The standard Rega RP8 in black costs £1598, or you can specify it with the Apheta MC cartridge factory fitted for £2198. Both versions come with the TT-PSU power supply as standard.