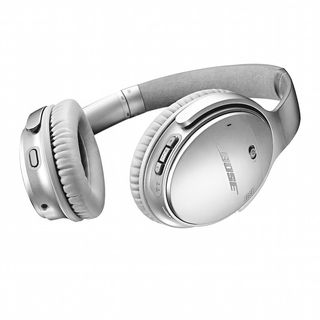 Bose claims the QC35 IIs have all the performance and features of the original QuietComfort 35s, including 20 hours battery life. The original QC35s were one of our favourite pairs of wireless noise-cancellers, and this new feature undoubtedly makes them an even more tempting proposition at the same price tag of £330.

There have also been a few small functionality improvements, in part to accommodate the Google Assistant integration. Like its predecessor, the QC35 IIs' noise cancellation is activated when the headphone is powered on, but the Bose Connect App also lets you choose whether to have it on high or low levels, or off.

The Action button can also be controlled by the Connect App, so it can be used for Google Assistant commands or to alter the noise settings.​

Bose has also announced a pair of 'true wireless' earbuds with the SoundSport Free.The buds, weighing only 9g each, house a new antennae system that promises a strong, reliable connection between them, as well as to the connected device.

Part of the brand’s fitness headphone range, they use proprietary StayHear+ Sport tips for a firm fit, and are water resistant to IPX4 rating. The buds come with a charging case, providing two full charges of their five-hour battery life.

If you’re worried about losing them, fear not. Bose has introduced a new “Find My Buds” feature on the Bose Connect App, which displays the time and place they were last used.

The SoundSport Frees will be available in the US in October, priced $250, with the UK to follow.

Jaybird Runs are a new pair of wireless in-ear headphones