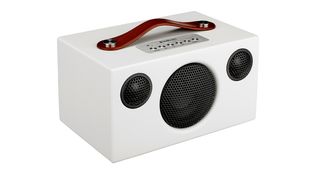 Exciting is certainly how we’d describe the sound made by our Product of the Year, Audio Pro’s Addon T3. Detailed, expressive and with a startlingly broad soundstage, this wireless boombox has redefined what we expect from a sub-£200 portable speaker. Its nearest competition was at £300, where the KEF Muo just pipped impressive turns from the Bower & Wilkins T7 and the BeoPlay A2 from Bang & Olufson.

The Addon T3 knocked Naim from the Product of the Year perch after two consecutive triumphs, but the company's superlative Mu-so retains its Best Buy Award in our highest price bracket. We’ve consistently referred to the Mu-so as the closest thing to hi-fi we’ve heard in a one-box wireless speaker, and there’s been nothing delivered over the past 12 months to change our mind.

At the other end of the spectrum, the ultra-groovy Ultimate Ears Roll nabbed our most affordable Award from Cambridge Audio’s Go with the kind of exuberance we’d never before have expected from a speaker costing less than a ton. Roberts’s Travel Pad and the Philips BT3500B, each of which received five stars this year, came close but couldn’t match the UE’s infectious enthusiasm.

Between those, a double triumph for Geneva. The Model S Wireless DAB+ is still unmatched by any mains-powered speaker between £200 and £600, while the AeroSphère Large reared its bulbous head in the face of Dali’s 2014 Award winner the Kubik Free. The AeroSphère’s inimitable design had us onside from the start, and its tremendous 360-degree sound stood out just as much – a real statement of a wireless speaker, in every sense.