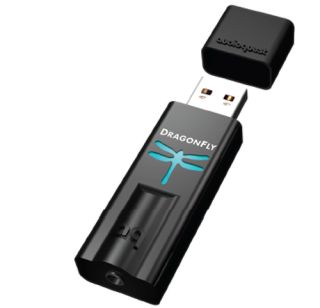 AudioQuest has confirmed details of its new DragonFly v1.2 USB DAC, which claims to deliver even better sound performance than the original DragonFly DAC.

The original, you may recall, tore-up the DAC rulebook, delivering great sound from a USB-stick sized device that cost around £200.

Sure enough, a host of similar products emerged on the market, and the DragonFly found itself relegated to 'good' rather than 'great' status. The v1.2 model hopes to change that.

AudioQuest claims to have refined the circuitry between the DAC chip and the analogue output stage, as well as improving the power supply.

The DragonFly v1.2 costs £129 – and has been with dealers since November 12th, so if you've bought one after that date you should already have one.

How to tell the difference? AudioQuest says the two are nigh-on identical but the colour of the analogue output on the new model is a little lighter, being grey rather than black. The box will be clearly marked however, while once connected to your laptop it will also say v.1.2.

The DragonFly has an asynchronous USB connection, works with PC and Mac, and has a 3.5mm analogue output that can deliver a fixed or variable output. The DragonFly claims full support for high-res audio, too.

We have the new AudioQuest DragonFly in the building, so look out for our full review.