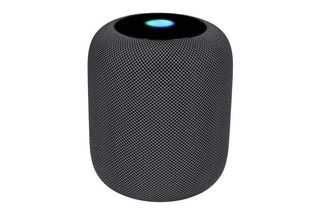 Apple's HomePod, its Siri-based rival to the Google Home and Amazon Echo, isn't the high flyer the company wanted it to be. In fact, according to sources that have spoken to Bloomberg, stocks are piling up and Apple has cancelled orders with some of its manufacturers.

While the speaker looked strong in January, by March the company had lowered its sales predictions. Some Apple Store workers say fewer than 10 HomePods per day are being sold.

This development isn't wildly surprising. The HomePod, while the best-sounding smart speaker available (even when compared to products like the Sonos One), doesn't have the same range of functionality as that provided by Google or Amazon.

The lack of apps, inability to connect via Bluetooth (it's AirPlay only) and Apple's insistence that the only natively compatible streaming service be Apple Music makes it a harder sell than it should be.

Moreover, it's relatively expensive - its £319 price tag is considerably heftier than the £50 you can drop on an Echo Dot or Home Mini, both of which could then be connected to a great wireless speaker. And, let's not forget, it could stain your table.

It's unlikely this news will cause many sleepless nights at Apple, though. The company recently hired John Giannandrea, who used to be the head of search and artificial intelligence at Google.

It's clear Apple is aware of the progress it needs to make, but the dedication of its fans and the walled-garden nature of the three major tech companies makes it unlikely its customers will be going anywhere because of the limitations of a fringe product.

Ultimately, we could see the HomePod progress as the Apple Watch did - a lacklustre start, followed by its rise to market leader. And if Apple is indeed investing more into sound quality with the possibility of its own range of headphones, this could be sooner than we think.

How HomePod was made: a tale of obsession from inside Apple’s audio labs