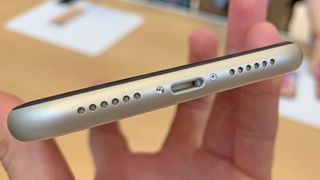 Apple may have to ditch its iPhone connection in favour of a more universal alternative under new EU ruling.

The European Commission is being encouraged by EU Parliament to force electronics companies to adopt a universal charging type, with the USB-C port used by Android phones the probable choice. The date on which the EU will rule on the matter is yet to be determined.

Apple has somewhat committed to the USB-C connector by implementing it on its more recent MacBook and iMac models, as well as its 2019 iPad Pro, but every iPhone since 2012, the most recent being the iPhone 11 and 11 Pro, has stuck with the Lightning port.

If a single charging method does become compulsory, it would seem unlikely that Apple would persist with Lightning in other markets, and would therefore likely mark the death of the proprietary port.

If passed, the legislation, which members of EU Parliament have been campaigning for for the best part of a decade, would ultimately see consumers needing only one cable to charge their Android and future Apple devices.

'A common charger should fit all mobile phones, tablets, e-book readers and other portable devices, MEPs will insist', says the EU briefing.

Bose to close all stores in Europe, North America, Japan and Australia