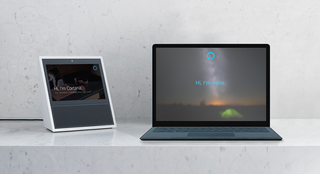 What this means is the benefits of each assistant - Cortana's access to Outlook email and other Windows 10 processes, and Alexa's access to skills and smart-home assistance - can be blended together.

It's not quite seamless, though: you'll have to tell one assistant to activate the other by saying, for example, "Alexa, open Cortana". On the bright side, you don't have to worry about your data being sent to either company without your knowledge.

Users will need to go into the Alexa app to activate Cortana, which involves also logging in with a Microsoft account.

While it's good to see some of the big tech companies playing nicely together (in stark contrast to how Google and Amazon are still fighting over YouTube on the Fire TV devices and Chromecast devices on the Amazon website), it's unlikely we'll see more of it.

Apple is particularly stringent about what devices can or cannot have access to its Siri voice assistant, which is only available in the HomePod smart speaker natively (although Sonos devices like the Beam can use it via smartphone).

Similarly, Samsung's Bixby is trying to edge its way into the world with its own smart speaker, although it' still trying to get over its lacklustre launch last year.