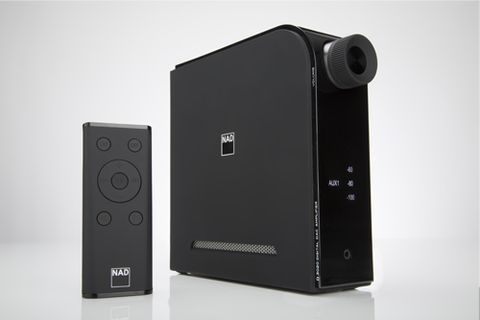 Best stereo amplifier up to £500, Awards 2013. A potential game changer. We hope other manufacturers take a brave-pill and produce amplifiers as innovative as this

Few hi-fi products truly deserve to be called legendary: NAD’s original 3020 amplifier is one of them. Thirty-five years ago this unassuming budget amplifier set the hi-fi world alight and established NAD as a key player in the hi-fi market.

At a time when most rivals were putting technical specifications, and particularly low distortion figures above all else, the 3020 put real world sonic performance first.

NAD is hoping to recapture that spirit with the new D 3020. The audio landscape is very different now, but the need for a high quality, sensibly priced amplifier with a carefully considered features set remains.

In the original 3020’s day a phono stage was vital, today its descendant proves its forward-looking credentials by not only including the now fashionable internal DAC but an aptX-capable Bluetooth connection too.

The latter opens up the amplifier for use with laptops, smartphones and tablets – vitally important, as so many people use these devices as at least one of their music sources.

The built-in DAC is decently equipped. It’ll accept data streams of up to 24-bit/96kHz through its asynchronous USB, coaxial and twin optical inputs. While our resident Apple MacBook worked straight into the USB inputs without issue, it’s possible that that some computers will require additional driver software, which can be downloaded from NAD’s website.

Traditional users haven’t been forgotten. There are two analogue inputs – one in the form of standard pair of stereo RCA connections and the other a 3.5mm jack connection that also doubles as an optical input.

Recognising that this amp is likely to be used with small speakers, NAD has also added a subtle-acting EQ feature and subwoofer output. Phono stage? Times have changed since the first 3020, if you want one of these you’ll have to buy an outboard unit.

Build quality is really good on the whole. The amplifier can be used upright – which is how we preferred it – or laid flat in a more conventional manner like the Airstream A100 (admittedly, the fixed display looks a little odd on its side). The amp will rock a bit when standing upright if you don’t stick on the supplied feet.

Either way this is a discreet design that just blends in. NAD wanted this amplifier to be at home in places where conventional rivals such as Rotel’s RA-10 or Marantz’s PM6004 don’t always fit in. We think the company has succeeded.

The D 3020 looks right at home next to a desktop computer where its carefully developed headphone output pays dividends. But equally, it could fit unobtrusively on a TV stand delivering really good stereo sound from say, a satellite box, into a set of speakers.

Of course it’ll fit on a traditional hi-fi rack too, but the point here is that the amp’s size and shape allows a great deal of freedom in use.

Once we start to use the NAD there are good bits and only a few niggles.

We like the resistant feel of the volume control, though the touch-sensitive controls on the top panel – power switch and source selector – can work a little erratically. At times they are overly sensitive, switching the amp off or changing source too easily when all we want to do is hold the amplifier to check a connection.

Other times we found ourselves stabbing at the power button getting frustrated that it just wouldn’t switch on. That said, over time we got used to it.

Take a look inside the neat little box and you’ll find Class D amplification circuitry, which makes perfect sense for its low power consumption (and resultant low heat output). A switch-mode power supply is compact by nature, which helps everything fit into the D 3020’s compact casing.

It’s true to say that both Class D technology and switch-mode power supplies are somewhat controversial in hi-fi circles.

While some brands such as Chord and Linn have managed to get good results, there’s still an underlying belief among some designers we’ve spoken to that both technologies have some way to go before they can challenge more traditional alternatives when it comes to sound quality.

That said, even the detractors would agree that improvements are coming in leaps and bounds. The Class D circuitry used in the D 3020 is claimed to sound more consistent across a range of speakers (traditionally a Class D weakness) and produce lower levels of distortion than rival designs.

So has NAD done enough when it comes to sound? In short, yes.

This little amplifier outputs just 30-watts per channel, but as with the original it sounds far more authoritative than that modest figure suggests. Our first impression of a smooth and solid sound stayed with us throughout the test period.

This balance makes the D 3020 surprisingly forgiving of poor quality recordings. Even a 192kbps recording of Eminem’s Mockingbird (through our MacBook Pro’s USB input) was listenable, despite it having what we know to be a thin and hard recording.

While it may not have the Monitor Audio Airstream A100's level of clarity, insight and refinement, the NAD is more expressive in its delivery. Its smooth presentation works well across a variety of genres and file types.

Just as importantly, the NAD manages to keep the track enjoyable, displaying plenty of finesse with Eminem’s rapid-fire delivery and a firm sense of grip on rhythm.

Move up to 24-bit/96kHz material in the form of Kate Bush’s Amongst Angels and the D 3020 responds with plenty of detail, a nice sense of delicacy and the kind of top-to-bottom cohesion even the very best at this price point would struggle to better.

The analogue inputs sound just as good. It doesn’t matter whether you listen to Kanye West’s overtly aggressive Yeezus set or Hans Zimmer’s wonderfully delicate Earth from the Gladiator OST, this little NAD amp comes up trumps. It has the muscle, precision and delicacy to make all types of music work.

Switch to wireless streaming via the aptX Bluetooth option and this provides a notably improved sound over standard Bluetooth, though still not as good as a wired connection. That said, the D 3020’s sonic character is unchanged when using Bluetooth.

The amplifier’s innate smoothness makes even low data rate music streams sound listenable, and we like the warm and weight the amplifier delivers

Most people will look at the D 3020’s £400 price tag and point to Rotel’s £350 RA-10 as one of its main rivals, and in some ways it is. There’s not much difference in price and both it and the NAD are essentially similarly priced stereo amplifiers.

In pure sound quality our vote would go to the Rotel – when it comes to rhythmic drive and dynamic subtlety the Rotel runs out a clear winner. It’s also more detailed in general. But is that a knock out blow to the NAD’s case? We don’t think so.

The NAD remains a musically satisfying unit. It works well across a wide range of music and partnering equipment, and while it may not be as capable as the Rotel in pure sonic terms, the standard it reaches is still very good.

And when you consider its compact size and clever shape (which give it access to situations where traditional amplifiers wouldn’t even get a look in), not to mention that spec-sheet, and we have no doubt NAD is on to a winner.

The NAD D 3020 remains a fantastic piece of hi-fi kit. The compact design and breadth of connections aside, it's the punchy, exciting, nuanced performance that truly engages us.

Its biggest threat comes from the stylish and detailed Monitor Audio A100, but the NAD may just have the edge with its warm, lively character and offer of Bluetooth.