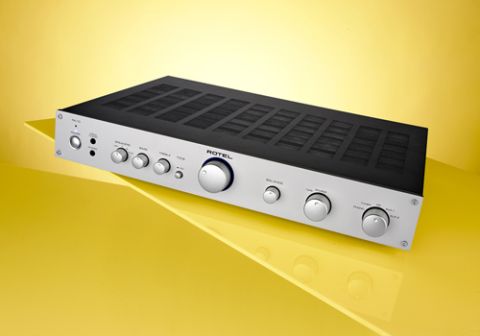 If there’s ever an amplifier that will tempt you into buying a turntable, this is it.

The Rotel RA-10 ran away with a 2012 Product of the Year Award – it was the best budget stereo amplifier at the time, with a gloriously lush, subtle and captivating way with vinyl music.

In light of the forward-thinking Marantz and NAD rivals, though, the Rotel RA-10 feels almost old-fashioned: it’s all analogue on the back panel.

Four line-level inputs sit alongside a moving-magnet phono stage, while you also get a tape loop for recording and a preamp output to add an extra power amplifier should you so desire. CD player, cassette deck, turntable – those are the Rotel’s natural partners.

There’s not a single digital input in sight on the slim chassis, but that doesn’t mean the RA-10 can’t play digital files.

Granted, it won’t be able to play any streaming service or files stored on a laptop (which may alienate some audiences), but you can connect a streamer, provided it has analogue outputs, to the Rotel.

There is also a way to play music from your smartphone, albeit via a wired connection. Above the 3.5mm headphone jack on the front panel is another 3.5mm connector, labelled ‘media player’.

Simply plug in your smartphone (or tablet or MP3 player) and the Rotel will happily play your Spotify playlists.

So the RA-10 isn’t quite the closed-off system it initially seems to be. Nevertheless, its strength does lie in its analogue heritage. And what keeps us coming back to this Rotel is that glorious phono stage.

We used a Rega turntable when we first tested the RA-10, and that’s the combination we come back to.

The excellent Rega RP3/Elys 2 turntable, to be exact, and as the needle makes its way around Tom Waits’s Closing Time we are reminded of just how good this pairing sounds.

As Waits strolls through Virginia Avenue with his gravel-tinged mutterings, the piano notes are punchy and delicate, while the saxophone shows off the amp’s dynamic subtlety.

The guitar strings could be pulled just a touch tauter and the edges of notes could be crisper, but the amplifier oozes depth and atmosphere.

We love the way the Rotel handles voices, and its detailed and melodic midrange excels with simple, vocal-led tracks.

Nuances of tone and emotion are laid bare in Waits’s Martha: his voice achingly intimate, the piano bittersweet and heartfelt.

The RA-10 does need careful partnering when it comes to speakers. Understandably, it struggles to drive our reference ATC speakers, and simply doesn’t get along with the zesty Dali Zensor 3s.

It’s not until we plug in the terrifically balanced and subtle Acoustic Energy 301s that the Rotel finally relaxes and comes out of its shell, filling the room with an authoritative sound that’s full of punchy detail and soaring dynamics.

Switch to quirky pop track Settle Down by Kimbra, and the Rotel charges through the calculated rhythm changes with power and vigour.

The drum beats are full-bodied and agile, while her lilting voice rings clear and hits the high notes without feeling cramped.

Be that as it may, the crisp hand claps and snappy rhythms could be handled with more precision and control.

Having heard what the new Marantz PM6005 can do, the Rotel’s position at the top of the budget class starts to waver.

A year ago, it was the PM6004 that was accused of being too smooth, and the Rotel RA-10 that had the subtlest, and most rhythmically charged sound.

But the new PM6005 steps it up a notch and reverses that position – its new-found insight and timing prowess sounds more exciting and musically cohesive.

We also can’t help but feel that the Rotel is lagging behind the times. While at higher price points it’s still common to find purist, stripped-down amplifiers, we’re starting to find more and more products below £500 that try to do more.

The Rotel was safe while these products fell short in sound quality, but now that’s changed. All of a sudden the lack of a DAC, Bluetooth connectivity and, yes, the almost stubborn refusal to include a remote control seem far less acceptable.

The Marantz PM6005 offers all of that, matches the RA-10’s analogue connections, and sounds better – all for £50 less than the Rotel.

Sure, you can add extra boxes to make the RA-10 competitive, but that would push the price up.

It’s hard to fall out of love with the Rotel RA-10. It might well tempt you to buy a turntable or a CD player, but once you hear the Marantz PM6005 you’ll want to upgrade immediately.

And, as much as we love the Rotel’s vocal talent and gloriously punchy sound, it doesn’t do enough against such a talented rival to justify a full five stars.

If you have your heart set on a simple analogue amplifier that favours rich melodies over outright precision, then we’re quite sure you’ll love the Rotel RA-10.

But if you really want your money’s worth (and a remote control), you might want to look to its rivals to find the better deal.