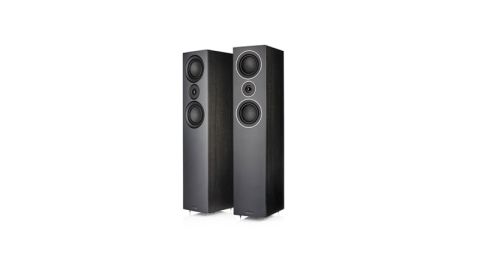 The Mission LX-3s are solid and capable performers, but they could do with more sonic sparkle

The Mission LX-3s’ recipe for success looks like a sure-fire winner. Take the Award-winning LX-2 standmounter, add another mid/bass driver and make the cabinet bigger to bypass the need for a stand.

The extra drive unit and bigger box pretty much guarantee more bass and higher volume levels. Just keep the price sensible, as Mission has, and what could go wrong?

But things aren’t quite as straightforward as they appear. These speakers do indeed deliver on both low frequency quantity and loudness levels, but also lose out to their standmounter relative in other areas.

Take the LX-3s out of their packaging and there’s plenty to admire. They feel solid, thanks to careful bracing of the 92cm tall cabinet, and there’s enough in the way of neat cosmetic detailing to make them look smart and relatively elegant.

There are three finish options – the black of our review sample as well as white and walnut alternatives. Weight-wise they’re typical, coming in at just less than 15kg.

We know the drive units well. They impressed us in the LX-2s, though here Mission’s engineers have doubled up on the 13cm mid/bass unit and placed the 25mm microfibre dome tweeter in the middle in a D’Appolito configuration.

This kind of arrangement helps with on-axis dispersion.

The crossover point is set at 2.2kHz, which is fairly standard, though at just short of 87dB/W/m, the claimed sensitivity is behind something like the £270 Tannoy Eclipse 3s’ superior 90dB/W/m.

This means that, all things being equal, the LX-3 requires a fair bit more power from the amplifier to achieve the same kind of volume level as its rival.

At least these Missions are fairly flexible when it comes to positioning. Though at their best around 40cm away from the rear wall in our test room, they can be placed even closer thanks to the use of the optional port-blocking foam bungs – each speaker has two rear-firing ports to tune the bass frequencies. We angle the Missions towards our listening position to get a more focused presentation.

Connection is by single-wire terminals only, and that’s fine by us. It’s far better to have a good single-wire run of cable than two sets of more compromised alternatives.

Once up and running, the Missions turn in a performance that’s a mixture of the familiar and the surprising. The general tonal balance is even and nicely judged, and commendably similar to the LX-2 standmounters we like so much.

Most floorstanders of this price have more bass than their standmount relatives, but it tends to be less well integrated.

That’s not the case here. The LX-3’s lows blend seamlessly with the midrange and are delivered with enough skill to cope well with the complex, weaving bassline of Van Morrison’s Moondance.

The presentation as a whole is pretty detailed, agile and surprisingly articulate with an explicit midrange and decently refined treble.

Only when we push the speakers hard do the high frequencies turn a little sharp, but even then they fall short of outright harshness.

Moving to something more large-scale like Holst’s Jupiter shows the LX-3s clearly have more in the way of dynamic reach and low-end extension than their smaller siblings.

It’s nothing out of the ordinary among their direct rivals, but they can render a pleasingly expansive soundstage and populate it with a good amount of care and precision.

While capable in most respects, these speakers also lack a degree of enthusiasm, something we wouldn’t say about the LX-2s or the Tannoys.

They play safe even when the music demands something more adventurous. Jupiter should thrill with its majesty and deeply contrasting dynamics, but through the Missions, we respect rather than love what we hear.

We feel informed rather than inspired. Similarly, Moondance’s sense of joy is dulled a touch thanks to slight shortcomings in the speaker’s ability to convey subtle shifts in momentum and the tendency to put control ahead of expression.

There’s no denying that the LX-3s are competent and informative speakers, but after the excellence of their smaller siblings, not to mention the likes of Tannoy’s far cheaper Eclipse Threes, we’re left wanting a little more.

See all our Mission reviews