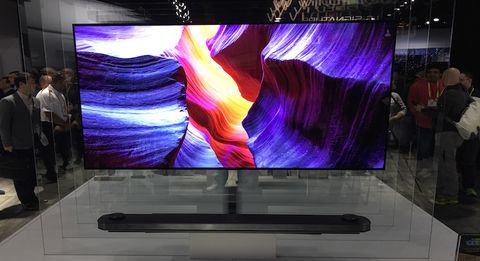 An impressive 4K performer for those that can afford it

If you're questioning whether LG's OLED65W7 'wallpaper' TV can really be worth £8000, then you're probably not the target audience (the 77in version costs a cool £25,000, just in case you were wondering). LG's flagship range of OLED TVs is aimed squarely at those looking for style, and to make the kind of statement your run-of-the-mill 4K HDR TV just can't provide.

But we've experienced enough five-star OLED sets from LG in the past couple of years to know there's every chance the outlandish styling will be backed up by some serious substance. Let's put that theory to the test...

But before we get to the juicy sections of the review, it’s time to give full disclosure. We only had six hours to spend with the OLED65W7 when we attended a special global launch in San Francisco.

Normally, our TV reviews can easily take days of testing and that’s before we start writing. In the case of the LG OLED65W7 this just wasn’t possible. We weren’t able to test the off-air performance, but we were able to calibrate the set and use test material ranging from Full HD Blu-rays through 4K discs to 4K UHD Netflix streams complete with Dolby Vision HDR.

Because of the limited time with the set, the fact we couldn't compare it to any of our favourite 65in TVs from 2016 and LG's inability to confirm it will be able to let us have a review sample in our testing rooms, we’ve decided leave the OLED TV without a star rating until we're able to test it as exhaustively as we'd like. It’s a rare occurrence but we feel it's the only viable option, given the unusual circumstances.

Given the W in W7 stands for ‘wallpaper’, there’s only one place we can start. At 2.57mm thick W7 isn't quite as thin as your average sheet, but LG's flagship OLED TV is still one of the thinnest of its kind and a guaranteed talking point - should you have sufficient funds at your disposal.

The design and execution is a great mix of simplicity and ingenuity. The TV comprises two parts: the OLED panel and the main control unit-cum-soundbar (which includes up-firing speakers, video inputs and TV tuners). The two are linked by a flat umbilical cable which runs from the TV and connects to a port on the rear of the soundbar.

You'll need to measure up beforehand to make sure the cable can reach the control unit and, since the bar scan't be wall-mounted, you'll need to consider how you'll keep it in close proximity to the panel.

The screen is aided by a brand new wall-mounting system. The ultra-slim wall bracket for the OLED65W7 uses clips at the top and magnets near the bottom to secure it in place. The slimness of the mount's design allows you to set the TV just a few millimetres from the wall.

In situ, it doesn't take a design guru to come to the conclusion that the W7 looks stunning. Combine this with the TV's 'Gallery Mode,' and this sliver of a TV should blend into most environments.

Given the W7's svelte chassis, there's no room for any connections. They are all hosted in the soundbar that comes supplied with the set.

It's quite a sizeable unit that's almost as wide as the 65in OLED - its party piece is the up-firing drivers that rise from either end of the bar.

On the rear of the unit you'll find four HDMI inputs, three USB connections and one optical input, plus a socket for the umbilical cable which runs from the rear of the OLED panel. There's no wireless subwoofer offered with the W7 - the speaker configuration is a couple of drivers firing upwards, two more firing out towards the listener and a couple of bass drivers added for some reinforcement.

LG's new WebOS 3.5 operating system looks as colourful and welcoming as ever, but the functionality it brings in 2017 is more advanced. There's a Magic Zoom feature so you can get closer to the on-screen action, and the system even supports the 360-degree VR content you might find on YouTube.

Those of you who'd like to use the TV as a picture-frame can take advantage of Gallery Mode, which allows you to display some pre-loaded 4K artwork or your own photos.

A pair of remotes come as standard, including a palm-sized option for carrying out basic functions and a larger wand with a built-in gyroscope which allows you to move an on-screen pointer. LG has added quick access buttons for Netflix and Amazon, and you can also assign buttons to your favourite apps and inputs by pressing and holding '0' on the main controller.

It's difficult not to obsess with the OLED65W7's design, but you can't let it sway your judgment - a wallpaper TV is still a TV, and the real proof is in the viewing.

New 4K HDR Blu-ray titles are coming thick and fast, but we start with a blast from one of our go-to discs, The Martian. In the aftermath of the storm, as the camera pans up to a dazed and confused Watney, the scenery looks breathtakingly realistic. The vast Mars landscape, complete with its rugged terrain, sandy hills and rocky outcrops, is beautifully rendered.

The distinct red colour that dominates the planet isn't overbaked and, when Watney finally comes round and dusts himself off, the grains of ruddy sand look so real and detailed you almost expect a light sprinkling to fall out of the TV and onto your carpet.

To get a taste of 4K and Dolby Vision HDR combined we hit the Netflix button on the remote, and opt for the historic adventures of Marco Polo. As the Polo family make their way to the palace of Kublai Kahn, the gloomy village and cloudy skies are punctuated by punchy blue patches of sky and beams of sunlight. The W7 handles this contrast extremely well, and it really helps to add to the atmosphere of the scene.

Colours appear natural without looking overblown - even the punchy palette of The Secret Life of Pets, complete with differing dominant hues, remains vibrant without straying into the realms of garishness.

We switch to a Blu-ray of Skyfall to put the LG's upscaling to the test - and the W7 doesn't let us down. The opening chase sequence through Istanbul is a frantic affair, and the OLED65W7 handles all the on-screen commotion extremely well. With LG's TruMotion set to 'User' and low values selected for both de-judder and de-blur, the TV handles the speeding motorbikes and rooftop panning sequences with an impressive level of grip and stability.

It's a very bright sequence which could quite easily appear overcooked on inferior sets, but the LG does a great job of providing insight, depth and detail within the image. There's the option of using LG's new HDR Effect mode which attempts to give dynamic range content an HDR look. It's worth experimenting with the different strengths on offer but, on the whole, we prefer to have the processing turned off.

A couple of chapters later, as 'M' arrives at her London abode in the middle of a rainstorm, the LG extracts fine detail from the downpour with aplomb. As Bond emerges from the shadows, the rough, rugged texture of Daniel Craig's unkempt facial hair and battered leather jacket are plain to see. The TV picks out the pattern and design of M's black dress without isssue.

The OLED65W7's control hub, looking suspiciously like a soundbar, can (according to the company's own website) offer "a genuine Dolby Atmos experience". Hmm. A genuine Atmos experience requires a couple of key features that are missing from LG's solution.

The speakers that rise theatrically out of the unit aren't angled like a pair of Atmos speakers (such as the KEF R50s) should be. They're not designed to push effects up and above your listening position. LG tells us their role is to raise the height of the audio so it appears to come at you from the middle of the TV. It's actually a sensible move given the likely position of the soundbar compared to the screen, but it isn't going to recreate the sound of a real Dolby Atmos system.

There's also a slight issue in that the soundbar can't decode the Dolby True HD soundtracks found on standard Blu-ray and Ultra HD Blu-ray discs. In turn, this means it doesn't actually support the Dolby Atmos soundtracks packaged in a 4K Blu-ray disc. The hub emits audio, but it isn't Atmos.

The only way to feed Atmos through the LG is if it's packaged in Dolby Digital Plus. Currently, only a small number of streaming services offer this feature - Vudu in the United States is one example.

If you can look past these technicalities, the general level of sound quality is actually quite good. It sounds clear, punchy and powerful, and superior to your average TV speakers. The up-firing drivers do their job of raising the action to screen-level and there's a decent impression of height even if it doesn't quite achieve that full immersive effect.

The LG communicates the excitement of the Istanbul chase in Skyfall with minimal fuss. The on-screen action and orchestral score are given equal footing - the piercing strings do a fine job of complimenting the raucous stunt choreography.

More bass weight and depth wouldn't go amiss, though. The balance is definitely skewed towards mids and highs. Stream Grandmaster Flash's White Lines from Spotify over Bluetooth and there's a hint of bass, but the speakers are really just scraping the surface. An injection of richness and a slightly fuller sound would help even the delivery out.

If you’re looking for the ultimate in TV design, then it's possible to make a case for the LG OLED65W7. It's a striking design, backed up by OLED picture quality plucked straight from the top drawer.

Sound quality, and the way the main speaker hub operates, isn’t perfect and you’re undoubtedly paying a premium for the styling, but if you’re in the lucky position where money is no object we doubt you'll be disappointed.

LG claims the same panel technology and processing power found in the W7 runs right through its line-up of 2017 OLED TVs, and if that’s the case the real stars of the range could be yet to come...